This post is part of my Year of Projects: Crochet Master Class

series. You can read the other posts in this series here.

Last week, I talked about exploring other crochet techniques which were not included in  Crochet Master Class: Lessons and Projects from Today’s Top Crocheters

, and the general consensus in the comments section was that I should go for it!

So I started a little intermeshing project.

I’m using two skeins of Donegal Tweed that I bought on sale at The Yarn Company.  If you’ve never tried intermeshing (also known as interlocking crochet or double filet crochet), here are the resources I recommend to get you started:

This will end up as a felted cozy of some sort.  One option is to turn it into the camera case I’ve been talking about for ages.  It somewhat matches my freeform crochet flower that is supposed to be the “focal point” of this case whenever I actually make it. 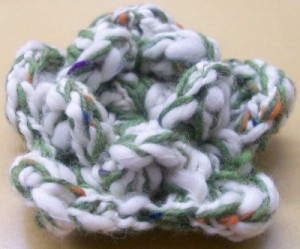 On the other hand, I’m contemplating buying a new camera, and there is no way MC will use a case with a giant flower on it.  I could make it into a case for my Kindle Fire instead.  I already have an awesome hand sewn case by Gothic Creations, so I don’t actually need a cover for it, but I thought it would be cool to have a crocheted one anyway.