This post is part of my Year of Projects: Crochet Master Class

series. You can read the other posts in this series here. 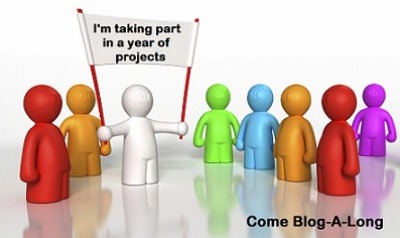 After weeks of ignoring my bullion stitch blocks, I finished one up on Friday.

Originally, my plan was to donate several bullion stitch blocks to Heartmade Blessings for the Crochetlist March 2012 charity challenge.  But after the unraveling fiasco when I learned that I couldn’t use black yarn, I wasn’t very motivated to restart my blocks.  This month’s Crochetlist charity is the Binky Patrol in Arizona, and the blocks are only supposed to be six inches.  So I actually had to pull out a few rows of this block to get it to the right size.  The pattern, Hybrid Peas by Margaret MacInnis, is way more exciting than this square would suggest, but a lot of the fun happens in the next few rows.

I also got a new camera yesterday!

Since I’ve been blogging, sharing one camera at home has become a challenge.  I take most of my photos outdoors on the way to and from work or during the day, and that means that either I can’t take pictures when I need to or that MC can never have access to the camera during the day time.  After a bit of research, I bought the Canon PowerShot ELPH 300 HS

on sale at Best Buy yesterday.  It is super tiny, which is great for my little hands.

Now how does this all relate to Year of Projects?  Well, one of my long standing WIPs is the camera case I started during the freeform class I took with Margaret Hubert.

I never got too excited by the project because I have been thinking about buying a new camera for a while.

So hopefully by next week, I will have finished my new camera case (which will go over the store bought camera case I got so the camera could have some extra cushioning).  I still haven’t completely decided what to do about the rainbow trivet I started last week, but I’d like to have two finished projects to share.