Just because it isn’t July yet doesn’t mean that I haven’t already sent and received my July Goody Box Swap!  I joined A Swap A Month on Ravelry when the July swap was still taking sign ups.  My partner is carajv, who seems to be my twin in opposite world.  She has been knitting since childhood and just picked up crochet, whereas I’m the opposite.  She also raises sheep, which is one of my life fantasies.  (I say fantasy because I actually know nothing about raising sheep, so I couldn’t possibly even consider it as a dream at this point in time.)  We messaged back and forth on Ravelry and I was so excited about getting her package together, that I basically ran out and bought everything within a few days and mailed my package in mid-June!  I hope this didn’t create too much pressure for carajv, whose package to me arrived on Thursday night.

I started by opening the note.

Then it was on to the smaller package. 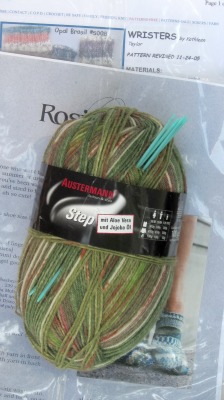 The first package included a skein of Austermann Step in Colorway 003, 4 dpns, and two patterns.  The first, Laura’s Sockies by Laura Grutzeck is from Rosie Knits, the pattern line of Rosie’s Yarn Cellar.  Rosie’s is one of the shops I visited during my whirlwind LYS tour of Philadelphia.  The next pattern is Wristers by Kathleen Taylor.  I just reviewed her latest book here.  It seems like carajv has been very observant!

The second package was very squishy and I knew from reading the card it would have handspun yarn from carajv’s sheep.

This package included two yummy skeins of yarn, each weighing in at over 100 grams.  The color is a beautiful, undyed cream.  The yarn is ultra soft, and I really can’t wait to get it wound into cakes!  As if that wasn’t enough, carajv also included a little bag with some super cute notions – a stitch holder and cupcake stitch markers – as well as a pencil and 5 Hiya Hiya dpns.  There were two great patterns in this package, too!

Perhaps this swap will help me get over my fear? hatred? of double pointed needles.  Or, perhaps not ;).  But either way, I have some amazing yarn, cool notions, and great patterns to play with!