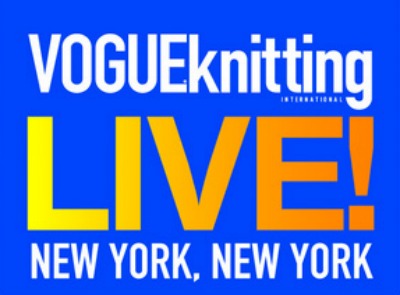 Today was the last day of Vogue Knitting Live, and I felt a bit under the weather (perhaps that cold shower yesterday was to blame).  I did actually take my obligatory pre-event picture, but I looked so grumpy that I decided not to post it.  I was wearing my All Weather Cowl (you know, the one that brought me fame and fortune), which turned out to be just right because I could wear it indoors comfortably.

I had a chance to interview Sally Melville today, as well as catch the back end of her lecture on Creativity.  She had some fabulous samples on display, including several sizes of the lovely L’Enveloppe.  Sally was wearing her own version over a stunning coat with a coordinating pair of Fluevogs.

I walked through the Marketplace one last time before saying goodbye to Vogue Knitting Live for 2014.  Though it was extremely tempting, I managed just to touch the buttons at Dusty’s Vintage Buttons without buying anything.  (I think we all know that I have way too many buttons at home to buy them at random.  I have to at least pretend there’s a plan for using them first!)

And then I visited the Feederbrook Farm booth.  Yesterday, in the rare quiet moments at the Michelle’s Assortment booth, I would look across at their yarns, and I ended up developing quite an attachment.  I decided on four skeins of Shepherd Spun, which is quite a bit of yarn for someone allegedly trying to reduce their stash.  In my defense, I fell in love with two of the hand dyed yarns, and rather than have them sit in my stash forever, I paired each with a coordinating solid. 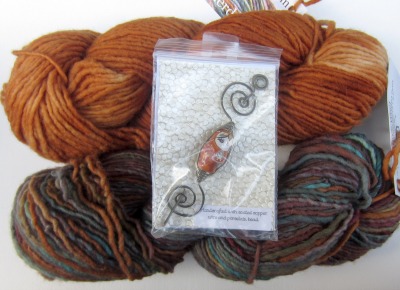 These two are a bit out of my comfort zone, but I really was drawn to the skein on the bottom, called Ava, which is surprising because it isn’t in my typical colors.  And then I had to buy a coordinating Matryoshka pin from Michelle – I had been eyeing them, too, but couldn’t decide on a color until I had the yarn.

The other two skeins are much more “me” – purples, blues, and greens. 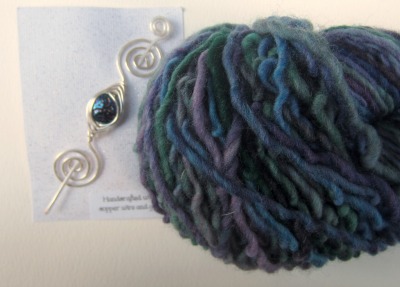 This skein is called Win and is paired up with the shawl pin I picked up yesterday. 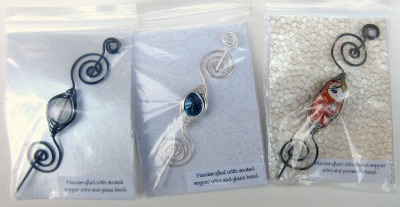 So after 3 days of Marketplace exposure, I ended the show with 3 shawl pins, and 5 skeins of yarn.

It was more than I (consciously) planned to spend, but I did happen to have cash left over, so apparently it was within the budget I had (subconsciously) created for the event.  I actually spent less than the cost of registering for a class, so in the end things seem to have worked out.

The charcoal Studio Donegal yarn in the center is already dedicated to being a cabled hat for my dad, and I have ideas about what I want to do with each of the other pairs.  But (head hanging in shame)…

I have yet to use any of the yarns I bought at last year’s Vogue Knitting Live.  (They’re pretty too, don’t you think?) 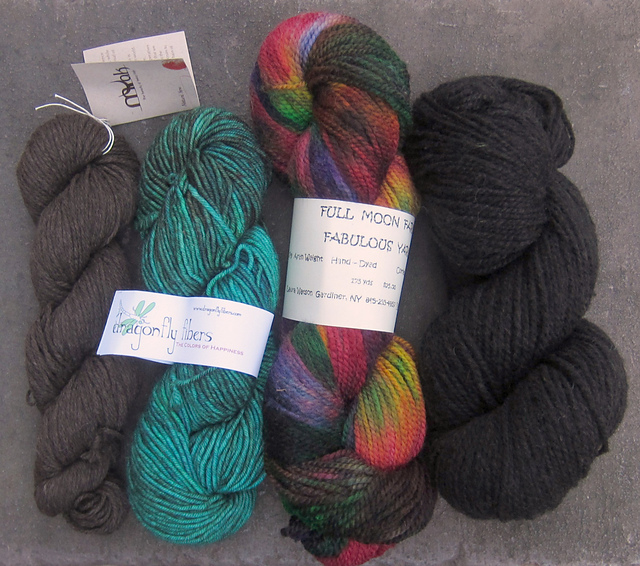 Partly it’s because I suffer from the “I must make something extra super fantabulous with yarn bought at a special event” syndrome, and the rest of it is because none of these lovelies are machine washable, which means they are unsuitable for most of my gift crafting.

I’m not going to feel too bad about buying five more skeins of yarn, since I did use over 19,000 yards of yarn (through both knitting and crocheting projects) last year.  I do, however, think it’s time to go through my stash again and see what I might be able to donate or sell.  Not only will that free up room for these five new skeins, but it will probably excite me about what I have on hand to use.

In my mind, I actually have new designs waiting for each of these pairs of yarn, but I think we all know that our initial ideas and our final plans don’t always align…