Earlier this week, I came home to this. 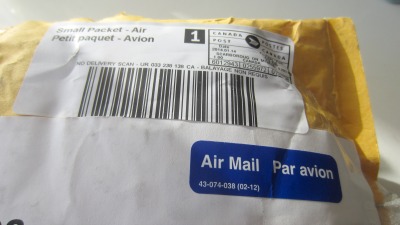 I hadn’t recently ordered anything from Canada, so I was puzzled.  However, upon turning it over, I discovered the customs form. 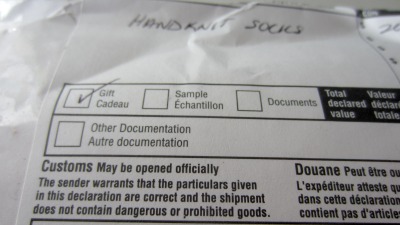 (In case you’re wondering, there’s almost nothing cooler than seeing the phrase “handknit socks” on a customs form when the temperatures are about 20 degrees below freezing.)

One of my favorite bloggers to follow is Lynn from Minding My Own Stitches.  I was first introduced to her blog when we were both regular participants in the original Year of Projects in 2011-2012.  We were two of the only bloggers who actually worked through a book rather than a series of patterns, though our approaches were quite different.  Also, we’re both members of Surmount the Stash, a group for those in dire need of stashbusting support.

Lynn is an avid sock knitter.  As you may recall, I’m not an avid sock knitter.  I do frequently fantasize about wearing hand knit socks, because they are so darned awesome.  (And I know this from experience, because I have also been the grateful recipient of a fabulous pair of hand knit socks from Underbaragarn on Ravelry, which you can see here.)

Once upon a time, after I lavished praise on one of her recently completed socks, Lynn mentioned she would knit me a pair.  Naturally, I jumped at the chance and instantly emailed her my address. (Or, as MC said when I tried to explain the situation: “So, basically you drove this woman crazy until she would send you a pair of socks to get you to leave her alone???”)  As soon as I saw the customs form, I knew the magic day had arrived. 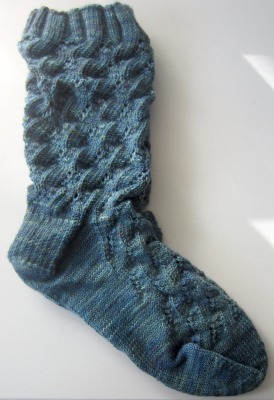 Inside was a gorgeous pair of Vorticity Socks that Lynn knit in Twisted Top Cat by Wandering Cat Yarns, a stunning hand painted yarn by a dyer in her area.  Apparently, making these socks was quite an adventure (you can read about it on her blog here, here, here, and here), so I’m extra thrilled to be the recipient.

As if an amazing pair of socks in beautiful yarn wasn’t enough, Lynn also sent me some other goodies: some very pretty soaps, a foot lotion (so I don’t destroy those socks!), and some wool wash. 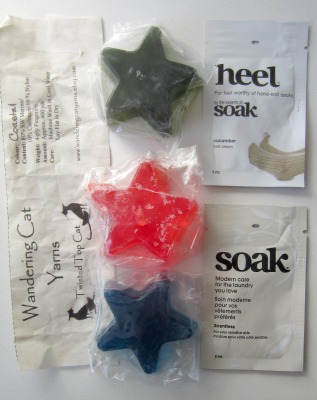 And here is my picture with the socks on ( they fit fabulously, by the way).  I have renewed appreciation for the sock knitting bloggers of the world – feet are strangely hard to photograph! 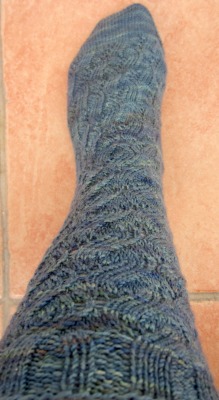 In other Year of Projects news, I’m still trying to come up with something awesome to make during the Ravellenic Games.  I didn’t want the stress of captaining a team, but I think I will offer up some prizes and a crochet/knit-a-long thread in my Ravelry group for anyone using one of my patterns during the games.

As for myself, it seems that whenever I have a ton of work, I develop a bad case of startitis.  Since I’ve recently had several big deadlines at work, I’ve starting thinking of launching an enormous undertaking by designing a whole lot of patterns for another year long knit-a-long for 2015.  I’m thinking that I should challenge myself to design and make samples for 7 designs during the Games.  I can’t tell if that’s a lot, or too little.  (Designing and making a sample for a small project in 2.5 days seems like a lot to me, but is it “a lot” in Olympic proportions?  Probably not.)

At the same time, I feel that I should be crocheting during the Games.  It’s pretty distressing to hear there won’t be a Team Crochet this year, and I want to do my part to support crochet.  And, of course, I can crochet much faster than I can knit.  So another idea would be to start/finish a bunch of crochet projects, like blankets, that would usually take a long time to complete.  Of course, big projects call for big amounts of yarn, which might lead me out into buying more.

Basically, as you can tell, I haven’t yet decided what to do during the Games.  Hopefully, by next Sunday, I’ll have a clearer idea!

Are you joining in the Ravellenic Games?