I’m excited to share an interview with Pauline Turner today as part of National Crochet Month.  Pauline is a multi-craftual artisan, designer, author, and teacher.  I was first introduced to Pauline’s work in the early 2000s when I read How to Crochet

as I was learning how to (finally) read crochet patterns.  Since then, I’ve learned more about her incredible work.

You can find Pauline online via her websites, Crochet Design and the International School of Awareness.  She is also on LinkedIn and has a Ravelry designer page. All photos are copyright Pauline Turner and used with permission.

Underground Crafter (UC): How did you first learn to crochet?

Pauline: I reluctantly learnt to crochet almost 40 years ago. I was teaching 41 other crafts and did not wish to learn something else.  (UC comment: You can read more about Pauline’s introduction to crochet in this feature in her own words from Crochet Insider.) 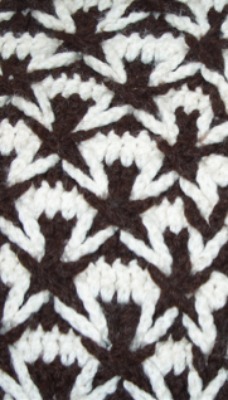 UC: What inspired you to start designing and writing about crochet?

Pauline: The reason for learning was because my Principle and Head of Department at the Lancaster and Morecambe College of Further Education, where I was a full-time lecturer of crafts and allied subjects, insisted I taught crochet at the end of that year.

A close of up the zip insertion on the cable hooded jacket from Finishing Techniques for Crochet: Give Your Crochet That Professional Look

UC: Does your experience as a crochet teacher influence your designing or writing?

Pauline: Absolutely – in every way. To my surprise, I discovered I could incorporate crochet into all 41 of the other crafts I was tutoring. This in turn led me to produce innovatory mixed media designs and also to write about crochet from a traditional/historical point of view in order to fill in the gaps that were missing in those early days. Then eventually this led me to start my own business, Crochet Design. 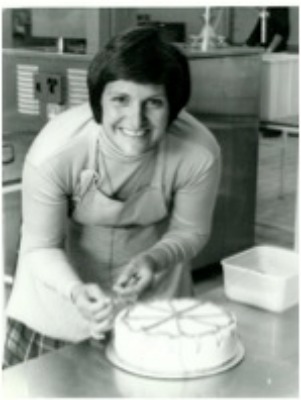 UC: What was the development process like for Finishing Techniques for Crochet

Pauline: The Beginner’s Guide to Crochet

, published by Search Press, which I wrote some eight years ago, has been extraordinarily popular and is in the process of being re-printed again in a different, very useable, format. There was a need for a publication that showed all the little tips and tricks that would help potential crochet designers to produce professional finishes. Anova Books suggested I produced the material for such a book in the form of Finishing Techniques for Crochet: Give Your Crochet That Professional Look

. Anova is part of a group that includes the publishers Collins and Brown and also Batsford, two publishers I had previously written for with my Crocheted Lace

and How to Crochet

The contract for this book was signed, the lead time was doable, yarn was sponsored by Rowan, and the rest was ‘eyes down, fingers flying on keyboard and with hooks’. To complete the deadline time, two outside crochet workers were asked to crochet and check the patterns of two projects. I went to London to be there as a consultant during the shoot.

UC: Tell us about the International Diploma in Crochet.

Pauline: Originally a distance learning course in three parts for crochet was devised during a brief spell when crochet was popular. I worked with Lancashire County Education Authority in course planning for adult education and they liked the format of this course but were dubious as to whether it was viable.

In 1983, the Diploma in Crochet was born for teaching crochet (Part I), designing and writing patterns for crochet (Part II), and for original creative crochet in the shape of art and sculptures as well as haute couture (Part III).  As the diploma course became more widely spread, recognised, and accepted, it attracted people from around the world and became the International Diploma in Crochet.

I did try to get my Diploma in Crochet course validated by an examining body but they all wanted me to lower the standard. The pass mark is 80% (a credit or distinction level in other courses).

There is no time limit as the course as been devised for people living in a real world with a real life. The bi-monthly newsletter keeps student interest – a necessity when learning alone. There is no starting time, and no time for the conclusion. Crochet Design needs to know if student has left the course. (We tend to prompt every 9-12 months to clear files.)

The take up of the course was slow because it was never advertised. It became known only by word of mouth. However, as more people realised its incredible content and high standard, the take-up began to gain momentum. Existing students were asked to work commercially in different fields and they in turn were subliminally advertising the course. Once I had qualified teachers who could assess Part I students, it was possible for Crochet Design to advertise the course overtly. Therefore, in the last three years, Crochet Design has enrolled an exponential number of students

A crocheted mandala in a ring, using textured yarns.

UC: What are your favorite crochet books in your collection (besides your own, of course)?

Pauline: This is an impossible question as different books become my favourites for different reasons.

Whatever I am working with will link me to favourite skilled authors, many whom I have met and therefore know that particular area of expertise I can rely on to confirm, deny, or consolidate what it is I am producing. Ironically, I only look at my books if I get a question about something one of them contains.

UC: Do you regularly visit any crochet blogs/websites for inspiration or community?

Pauline: Not as regularly as I would like. When the office is relatively in order and I have finished a project, I will browse the net for a couple of hours usually to catch up with magazines, CGOA, and student blogs. The difficulty with the net and myself is the time it can eat away when I know I have other deadlines looming. I do not visit these for inspiration, as I take my inspiration from nature and the people I meet even at airports and on trains. I cannot say I have never been inspired by something on the web but writing this, I am hard pressed to know when or what.

A crocheted plant pot with flowers.

UC: How did you become involved with the International School of Awareness?

Pauline: Ah, now isn’t that a pearl of a question? It happened without any personal intention, but just followed a series of events. During my crochet workshops, people commented they felt better by just being there. Others commented I had an incredible heat in my hands when I assisted them with their crochet and they were not feeling too well. Another frequently unsolicited comment was how I brought the best out in people. Apparently, I was able to succinctly encapsulate the reason or source of what was happening to them and with that awareness they could resolve the situation – this was not only with their craft but with their life.

My ability to use the seventh sense enabled be more aware of what was happening globally, in the atmosphere and environment. Without my knowledge, this ability was becoming known to the point where I was invited by businessmen and therapists abroad, to teach them how to develop their seventh sense. This happened before the turn of the century and the tools I shared with them were ones that had been designed for what would happen after 2012. Through these stages, the International School of Awareness came into being.

A machine knit design with a crocheted yoke.

UC: Do you have any upcoming classes or projects you’d like to share? (Dear readers, please note that I was quite delayed in posting this interview and these events have already passed.)

Pauline: On 20th October 2013, there is a celebration of the 30 years existence of the International Diploma in Crochet. I felt it was an achievement that deserved to be celebrated for all the sake of all students, past and present, who exist all around the world. It is also an acknowledgement to the supporters throughout the years who believed in its value.

This is an historic event which began in Morecambe, Lancashire UK, and is the reason the chosen venue is the Platform, Morecambe in recognition of Morecambe’s role in Crochet Design. Crochet Design has always resided in Morecambe and is the home base of the Diploma. Just some of what will be happening will be a 30 year ‘story board’. The Mayor of Lancaster will be present to close the event and also present the prizes to the competition winners. The editor of Inside Crochet magazine will open the even and hand the well-earned awards to a full graduate from Northern Ireland, plus certificates to students who have recently completed Part I and Part II. There will be ‘to- die-for’ displays of students work, along with trading tables. In the morning, children will add their stitches to a ‘Playtime on the spot’ collage. Everyone is welcome. The crochet competition will be judged on the previous day and there is more time to take in entries.  (UC comment: You can download a PDF report of the celebration, including winners of the competition, here: International Diploma in Crochet Report.)

Higham Hall near Cockermouth, Cumbria, UK features a residential 4-day course twice a year which I am tutor of, and the next one in January is on textured crochet. In February I will be giving a talk and taking a workshop with the Berkshire Spinners, Weavers & Dyers.

Readers, Pauline has shared this revised list of upcoming events, since I was so delayed in posting the initial interview.

Thanks so much for sharing this interview with us, Pauline, and for your patience.  We appreciate all you have done to advance the art and craft of crochet!

2 thoughts on “Interview with Pauline Turner”