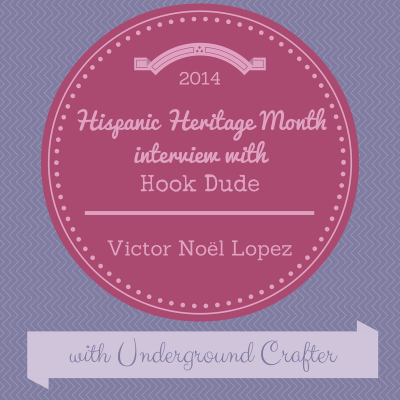 Today’s Hispanic Heritage Month series interview is with Victor Noël López, an emerging crochet designer and prolific charity crafter. Victor is known as hookdude on Ravelry and blogs at Project La Paz (Project Peace). You can find his (mostly free) crochet patterns on his Ravelry designer page. All photos are copyright Victor Noël Lopez unless otherwise noted and are used with permission. You can click on the pattern images to link to the Ravelry pattern pages.

Victor Noël: I’m a self-taught crocheter/knitter. Four years ago (after my retirement), I picked up the DVD I Can’t Believe I’m Crocheting and just followed along. About a year ago, I decided to try knitting and I taught myself by watching some YouTube tutorials. The rest, like the saying goes, is history.

Victor Noël: Probably my obsession for detailed work. The actual sitting down and designing a pattern just happened. I always liked to read and decipher crochet symbols in patterns. To me, it was like putting a puzzle together. One day, I started drawing a crochet symbol pattern for a woman’s hat. It just took off from there. My interest in color is another motivating factor. I would like to see more color choices in fabric items for men.   I’m working on coming up with more designs for the male customer and for the woman who is shopping for a man.

UC: You do a lot of crafting for charity. Can you share your motivation for starting Project La Paz? How do you set your charity goals and identify locations to donate?

Victor Noël: I live in the greater metropolitan area of San Antonio, Texas. A couple of years ago, I crocheted scarves for Operation Gratitude, an organization that sends care packages (that include scarves and hats) to our troops stationed overseas. After my involvement with O.G., I began looking for local organizations in my immediate area that could benefit from donations of scarves and hats. I chose a local children’s shelter to which I donated many crocheted hats for the children. It was a very moving experience for me and that provided the impetus for Project La Paz.

Obviously, I can’t work with all the charities where I live due to it being a large metropolitan area, so I carefully research the charities before I make my decision to make my charitable donations. Because I am a one-man operation, I have to limit my choices. At present, I am working with two local organizations. In addition to working with the charities, I also volunteer at a local hospital.

UC: You mention on your Ravelry profile that when you joined, you thought you were the only guy who could knit and crochet. What has it been like meeting other men in the knitting and crocheting community?

Victor Noël: I was welcomed to Ravelry with open arms by both women and men alike. Had I known what Ravelry was and what it offered, I would have joined this community four years ago. I have met many talented male and female fabric artists here as well. It’s just incredible to see literally thousands of other men like myself who crochet and knit. I thought I was the oddball, and I never imagined that there were so many other guys. It’s very inspiring to see so much diversified talent. I have embraced this community with an open mind to learning and creating. When you stop to think about it, that’s what it’s all about … you learn so that you can create.

UC: You’re a first generation Mexican-American. What was the yarn crafts scene like in your community when you were growing up? How does that compare with the current scene in Texas?

Victor Noël: I grew up in South Texas along the Mexican-US border in a predominantly Hispanic community of under 100,000, minute when you compare it to the city where I live now. From what I can remember, the yarn crafts activities were left exclusively to women crafters. Fortunately, all of that has changed. Through Ravelry, I have discovered that many crochet/knit groups and guilds can be found in larger metropolitan areas of Texas. I know that there’s a yarn craft group in my hometown that meets on a weekly basis at the public library, and, there’s one male Hispanic who attends the sessions. He just happens to be a high school friend of mine who became interested in crochet after he retired. I’m hopeful that in the future, more men in Texas will show an interest in this craft.

Victor Noël: Having been raised in a predominantly Hispanic culture that strongly delineated male and female roles has definitely influenced my crafting activities. For example, I will not crochet or knit in public. I prefer to do my yarn craft work at home. Many of my friends, both male and female, know that I crochet and knit, and though, they were surprised at the revelation, they have applauded all of my efforts in learning the craft. It’s not that I feel embarrassed because of what I create with yarn, but I feel that our society today is still not ready to embrace men making the “cross-over” into yarn crafting. That may not hold true for cities like New York and Chicago, but that’s just my opinion. The yarn artistry field is still dominated by many talented women, but, hopefully, that will change in the future as more men begin to share their art with the public.

Victor Noël: The book that I always keep close for reference is The Big Book of Crochet Stitches

by the two leading legends in crafting, Rita Weiss and Jean Leinhauser.  I like that it’s divided into stitch categories and is an easy reference.

Victor Noël: The Spanish language Tejiendo Peru is one that I always check out. Even though I speak Spanish, whenever I come across a pattern in Spanish, I always check out this website because it has some helpful crochet and knitting terms both in Spanish/English. The website also has some fantastic tutorials in Spanish via YouTube.

UC: What are your upcoming charity plans?

Victor Noël: My plans at the present are to continue working with the two local charities and provide them with hats and scarves for the colder months. That alone takes up about 70% of my crafting activities. Because I feel that I have been blessed in many ways, I want to give a small part of myself back to the community. It gives me much personal satisfaction knowing that I can bring some warmth to a person by means of a knit hat or crocheted scarf. I have also found that both crocheting and knitting are very therapeutic.

Thank you for sharing your story, Victor Noël. Your charity work is truly inspiring!