It’s that time of year when we all start thinking about gifts for others – and for ourselves. I’ll be sharing a series of gift guides for crocheters, starting with today’s edition: Yarn Club Memberships and CSA Shares.

Yarn club memberships and CSA shares are gifts that keep on giving. For the next month, or season, or year, the recipient will receive a delightful package of yarn in the mail, sometimes even including a pattern. These gifts are also great for knitters. (If you’re looking for options for spinners, many of the companies in the gift guide also have a fiber or roving option.)

So what are yarn clubs and yarn CSA anyway?

Yarn clubs are subscription services for yarn lovers. Many yarn clubs operate on a mystery model, where the exact yarn and/or colorway isn’t revealed until the package is received. Some yarn clubs are organized by a single yarn company and include exclusive colorways or first releases of a new yarn; others are coordinated by one company and include yarn from several dyers, spinners, or manufacturers.

CSA is an abbreviation for community supported agriculture. (You can read a brief but interesting history of CSA in the United States here.) Members buy a share of a farm’s fiber or yarn production in advance, which allows the farmer to plan and budget and also gives the share holder the opportunity to get to know more about how the yarn was produced and the animals that contribute to the yarn. CSA yarn is sometimes undyed, in which case it would also make a great gift for a dyer.

I should mention that I haven’t participated in any of these yarn clubs or CSA programs in the past, but they look like a lot fun! I’ve compiled a list of 5 yarn clubs and 5 yarn CSA programs that are still open for 2015. 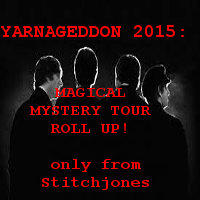 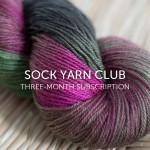 If you’d like to find more yarn clubs and yarn CSA programs, I have a Pinterest board devote to this theme. Many of these open up at different points during the year and aren’t accepting new subscriptions or shareholders now.