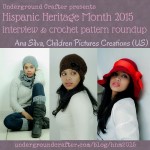 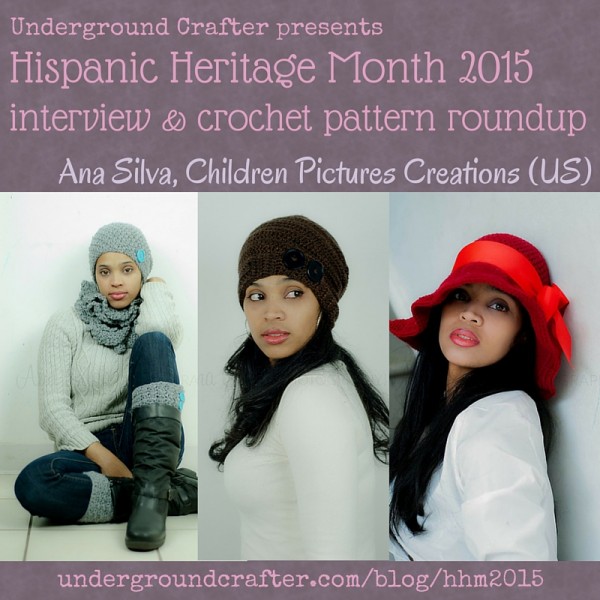 I’m sharing the sixth interview in this year’s Hispanic Heritage Month series with Ana Silva from Children Pictures Creations. Ana is a Dominican-American crochet designer and photographer. I’ll also be including a roundup of my 5 favorite crochet patterns from her collection!

Underground Crafter (UC): How did you first learn to crochet?

Ana: I went to the Dominican Republic in ’94 and my cousin tried to teach me. I was somewhat interested but it wasn’t until ’02 that I began to be really interested. I started collecting patterns and books. Back then, YouTube wasn’t around or as popular, so it was pretty hard learning from books. I got discouraged and stopped altogether for about 18 months. But my persistent nature wouldn’t let me quit so I picked it up again and haven’t stopped since. 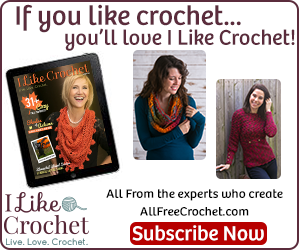 Ana: It’s pretty funny because I never had any interest in designing. I would just gather the free patterns that I liked and would make them. Then one day, I was watching the new Strawberry Shortcake cartoons and decided to make the hats and leg warmers based on them. I figured it couldn’t be too hard. Boy was I wrong! Writing those patterns was a nightmare. I knew what I wanted to say but it was hard to write it well enough for others to understand it. Eventually after many days of testing, the patterns were released and were quite successful.

UC: Your designs are entirely self-published. What do you enjoy about the self-publishing process?

Ana: I think the freedom of it. You go at your own pace and don’t have to be pressured to write patterns by a certain time frame.

UC: You’re also a wedding and portrait photographer. Without giving away all of your secrets (smile), can you share some tips for crocheters who want to take great pictures of their projects?
Ana: It’s all about the light! You don’t have to have a live model, though it really helps because people are better with visuals. But if you don’t have a model, at least make sure that you take the pictures with a lot of light so the details show.

Ana: Anywhere. I’m constantly thinking and designing in my head. If I were to write everything that comes to my mind, I’ll be writing forever, lol. When I watch TV, I think about how I can make whatever I’m watching into a pattern. My husband says that’s all I think about. And he’s sort of right, ha ha.

Yarns on Sale – Hundreds of yarns to choose from at Hancock Fabrics!

UC: You were born in the Dominican Republic. Were you also raised there? What was the crochet and yarn crafts scene like in your community when you were growing up?

Ana: I lived there till I was 12 years old. I didn’t know about crochet much other than the beautiful tablecloth we had at home. I always found it fascinating but never questioned how it was made. Then I came to the U.S. and never saw that kind of work, so I forgot about it.

UC: How does that compare to the crochet/yarn crafts scene in Philadelphia today?

Ana: Though I can’t really compare, Philadelphia has a lot of yarn shops. When I go to the city, I always pass by and wish I could buy them all! Of course, I have to curb myself or hubby would kill me.

Ana: Not really. I had just gotten pregnant and just wanted to make something for my baby. I remember those little baby outfits when I was little and found them so adorable. So I wanted to make cute stuff for my baby girl.

UC: What is your favorite crochet book in your collection?

Ana: Wow, my favorite one? I’d say it’s the 200 Crochet Blocks for Blankets, Throws, and Afghans. So many different stitches and colors.

UC: Are there any Spanish- or English-language crochet/crafty blogs or websites you visit regularly for inspiration or community?

Ana: Believe it or not, I have never read a Spanish pattern :/ Shameful, I know. I always look up English patterns only. AllFreeCrochet is my all-time favorite website.

Thanks so much for stopping by, Ana, and for sharing your work with us!

What’s your favorite pattern by Children Picture Creations? You can find a full listing of her designs on Ravelry.