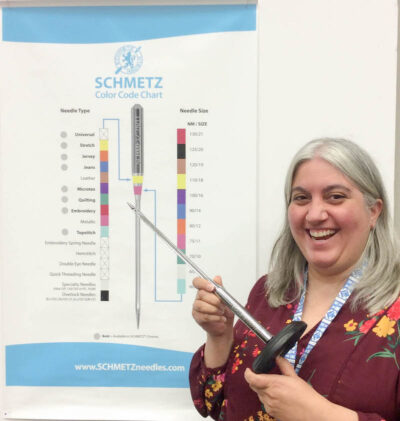 Just over two weeks ago, I had the chance to visit Houston for the Quilt Market, an annual wholesale industry trade show for the quilting, textiles, and soft crafts industries. In today’s post, I’ll be sharing my Quilt Market recap, along with a giveaway for your chance to win some goodies I brought back home, so read on for details!

This post contains affiliate links. I may receive compensation (at no added cost to you) if you make a purchase using these links. With the exception of my sample spree purchases, other items were generously provided by the companies noted.

Quilt Market is a huge annual trade show that has been in operation since 1979. This year, it took place from Thursday, October 24 through Tuesday, October 29. It’s not open to the general public, so I had to show evidence that I work with companies in the sewing and quilting industry in order to be admitted.

I flew into Houston on Thursday night and on Friday morning, I had the chance to visit local museums with my sister, who now lives in Houston, and my mom, who was also in town. It was raining pretty heavily, but we went to the Menil Collection and the Museum of Fine Arts, Houston. I was very inspired by Mapa Wiya (Your Map’s Not Needed): Australian Aboriginal Art from the Fondation Opale, a special exhibit at the Menil Collection (no photos allowed) and the Berthe Moriset exhibit at the Museum of Fine Arts (left the camera in the car).

After a hearty brunch and the museum exhibits, my sister dropped me off at the Convention Center, and my time at the Quilt Market began! On Friday afternoon, I attended two Schoolhouse Series classes by Clover USA. Schoolhouse Series classes are short — about 30 minutes long — and they introduce tools and techniques that quilt shop owners and bloggers can use for inspiration.

I learned a lot from both classes, but my favorite part was getting to see Nancy Zieman’s I See Spots Modern Quilt and learning about the Clover Trace ‘n Create Quilt Templates (Carefree Curves Collection), which lets you sew amazing circles, half circles, and quarter circles without curved piecing. I also got to see the Clover No-Hassles Triangles Gauge in action. I can’t wait to try both out and of course I’ll share on the blog when I do. You can read more about my experiences in the Clover classes and at their booth in my guest post on the Clover blog.

After classes on Friday night, there was an event called Sample Spree. I didn’t really know what to expect but I heard you could get great deals on tools and fabric. There was a line leading up to Sample Spree that quite literally spanned the entire floor of the convention center. (It was about 2-3 city avenue blocks long!) As you might expect, once I got inside it was like door busters on Black Friday — people were actually running towards certain tables to get deeply discounted fabrics and tools. I decided to take it slow since I had a limited budget for this trip but I did end up getting some goodies: a Mountain Mist Wool Pressing Mat, a pattern from Tiny Cottage Quilts, and a selection of WonderFil Specialty Threads.

After Sample Spree, I went out to dinner with my friend Carolina from Always Expect Moore and 30 Minute Crafts. Carolina put me to shame because she had sewn a special selvedge bag…

Had to make myself a special bag for Quiltmarket! And what’s more special than a bag showing off AGF selvedges? .. The bag itself was a quick make, but I also wanted function. The inside has both a padded pocket and a zippered pocket to help me stay organized. I have a feeling this is going to be my new go-to bag! ❤ .. #quiltmarket #quiltmarket2019 #selvedgebag #selvedge #selvedgelove #artgalleryfabrics #wearefabric #handmadebag

…and made her own shoes for Quilt Market.

These shoes were made for walking … all around QuiltMarket. And that’s just what they did! I was only able to spend one day on the show floor, but it was fabulous! Now I’m headed home … Check out my stories to see all the fabulous quilting friends I was able to hang out with! .. #quiltmarket #houstonquiltmarket #diyespadrilles #wearefabrics

On Saturday morning, I got up early to take an 8 a.m. Take and Teach class with Schmetz all about needles. This class was a real eye opener. I learned a lot about different needles for various types of sewing and fabric, how often to change sewing machine needles, and how to identify if your needle is dulled (before your project gets destroyed).

And, at the end I got to hold the giant demonstration needle, which was pretty fun.

The class was co-sponsored by Shannon Fabrics, so in addition to a packet of needle information, we also got two Shannon Fabrics kits with different fabrics. I can’t wait to try them both out!

Once the class was over, I headed out to the exhibition hall which was filled with about 1,000 booths from different companies. I got to see some old favorites and learn about new companies.

First, I stopped by the booth of my sewing machine sponsor, Baby Lock, and had the chance to see some of their latest models in action, including the Regent, a long-arm quilting machine that you can use from a sitting or standing position, and the Altair, the Meridian, the Aerial, and the Pathfinder, all of which are single-needle embroidery machines. I was also able to see Klasse needles and Madeira threads.

Next, I stopped by the Search Press North America booth to see my friend, Anne, who sends me review copies of crochet, knitting, sewing, and quilting books, and also arranges for giveaways. Anne provided me with review copies of several quilting books: Sarah Payne’s Quilt School, One-Patch Quilts, and Mini Quilt Blocks.

While I was at the booth, Debbie Shore was getting ready for her book signing, so I got to take a picture with her and her new book, Build a Bag Book & Templates: Satchels. It isn’t even released yet!

Next I went to Demo Alley, where companies demonstrate products in a quieter area away from the main traffic of the show floor.

At the Franklin Quilt Company booth, I got to see a demonstration of the Shortcut Binding Tool. I was able to get a sample for review, and I can’t wait to try it out and share with you in an upcoming post. It takes all the math out of binding a quilt and makes measuring binding strips easier.

I also got to see a demonstration of Crafter’s Companion Gemini, an electric die cutter that cleanly cuts through several layers of fabric. This would be a great tool for quilting projects that require a lot of cutting.

Catherine Redford was sharing her embroidery designs at the Global Artisans booth. She has some stunning work!

I also saw a demonstration of the Sew-n-Quilt stamps which are designed to make sewing hexagons on a machine easier and as an alternative to English Paper Piecing. I will let you know my thoughts once I try out this kit.

After Demo Alley, I met up with my friend Mary Beth from Hooked for Life Publishing and Tailor Made Cosplay for lunch. It was nice to get off my feet for a bit!

After lunch, I passed the Lucky Spool Media booth and they were having a book signing, so I waited in line to get a copy of Patchwork USA signed by Heidi Staples.

By this point, my bag was pretty heavy so I stopped by my friend Pam’s booth, The Decorating Diva. Not only did Pam let me stash my bag under her table, but she also filmed a short video for me about one of her latest patterns, the Caprice Organizer Bag.

Pam’s booth was packed full of fun tools and bag-making supplies and patterns.

One of my favorite booths in terms of visual impact was the Modern Quilt Studio booth. As you might expect, the booth had stunning quilts and modern quilt projects, as well as inspiring books like Rediscovering Your Stash.

I also stopped by The Honey Guy and got a sample of WaterBlocker Skin Cream to try out. I will keep you posted on how it works after a few weeks.

The Sulky booth had samples of Filaine thread. This is an acrylic thread that you can use for embroidery and top-stitching. I can’t wait to try it out on an upcoming project.

On Saturday night, I went out to dinner with my mom, my sister, and my sister’s husband. We learned that my Sunday flight back to New York might be cancelled due to bad weather back home, so I rescheduled to an earlier flight. That meant that I would only have a few hours to see everything else on Sunday.

I again arrived at the convention center early for an 8 a.m. class by Poorhouse Quilt Designs for the Holiday Baubles pattern.

The teacher is a Michael Miller Fabrics brand ambassador, so in addition to the fabric included in the kit for the class, we also got Sew Colorful charms and some beautiful fat quarters that happened to be in my favorite color palette. I forgot to take pictures at the Michael Miller Fabrics booth, but everything on display just made me want to run home and start sewing!

After class, I had just a little time left to see things on the show floor. I got to watch a demonstration of Hotfix Adhesive, a fusible that can be used with cutting machines…

… and get a pin from my friends at Oliso, who had previously sent me a Mini Iron for review. (Spoiler alert: I love it! Full review coming soon.)

After that, I was able to quickly visit some other booths to check out new fabrics, threads, and notions, but I had to leave for the airport at around 11:30 a.m.

Overall, I had a wonderful time and now I know what to expect for my next trip to Quilt Market. And, now’s the part of the post you’ve REALLY been waiting for… the giveaway! I’m including the Holiday Baubles pattern, several magazines published by American Patchwork & Quilting, an Avery Lane sewing pattern for an 18″ doll skirt, pins from several booths, and whatever other sewing and quilting goodies I can fit into an envelope.

This giveaway is open to readers with mailing addresses in the United States, except where prohibited by law. Use the Rafflectopter widget below to enter by 11:59 p.m. Eastern on Monday, November 18, 2019. A winner will be chosen from the entries at random and will win a selection of items received by Underground Crafter at Quilt Market. The winner will be contacted within one week after the entries close. Winner will have one week to claim prize. If winner does not respond within one week, prizes will be awarded to alternates. Good luck!