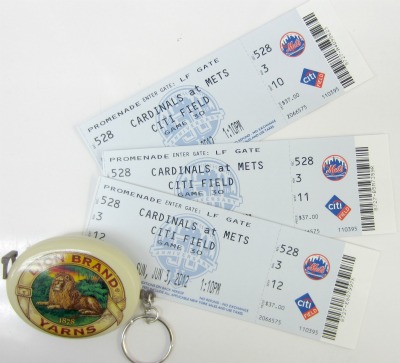 Once upon a time, I was a huge Mets fan.  As a childhood tomboy who was also a bookworm (interesting combo, I know), I was convinced after reading Bums: An Oral History of the Brooklyn Dodgers

by Peter Golenbock that to support the Yankees was tantamount to treason.  I was born in Brooklyn, after all.  Besides, my best friend in junior high school was also a Mets fan.

(Side note: My dad’s family love the “Jankees,” but I excuse that because they arrived as baseball fans from Cuba after the Dodgers left Brooklyn but before the Mets were created.)

Flash forward to my high school years, which were spent as a scholarship student in an artsy private school.  Talking about baseball was not going to make me any friends there, and soon enough I developed other interests anyway.  As an adult, I never really got back into professional sports fandom, but I still have a cozy corner in my heart for the Mets, who I followed religiously throughout the 1986 championship season.

The fact that the Mets are the only New York team that has partnered with The National NeedleArts Association for Stitch N’ Pitch makes them even more lovable.  I was there in 2010 when we set the Guinness World Record for most people crocheting simultaneously.  (I am actually visible from behind in this video of the event, from 1:44 to 1:46, wearing a blue shirt and black cap.)

Last year, I wasn’t able to attend the game since it was on a weeknight and I had to work late.  So I was really excited when I found out that this year’s game will be on Sunday.  Apparently, it will even be nationally televised!

Yesterday, I picked up tickets for me and my two craft buddies from the Lion Brand Yarn Studio.  Since we reserved the tickets early, we also got awesome freebies – Lion Brand tape measures on keychains.  (Does this mean I can no longer avoid making a sweater by saying I can’t take accurate measurements??)  I also found out that John Franco will be inducted into the Mets Hall of Fame before the game.  Add that to the yarn marketplace, and it sounds like a great night will be had by all.  Now all I need to do is figure out what project to bring with me!