I’m really excited to unveil my very first finished knitting pattern, the Sandworm’s Journey Beanie, today.  The pattern is part of a collection for charity to support the Knotty Knitters 2013 calendar, so I thought it would be fitting to share an interview with Marsha Cunningham, the founder of the Knotty Knitters for Autism.  I’ll start with my interview and then share more details about the pattern.

The Knotty Knitters calendar features women of all ages posing tastefully au naturale with some of their handmade creations.  You can find the Knotty Knitters for Autism online on Facebook and Ravelry.  Marsha can be found on Ravelry as marshaknits or through her Etsy shop. 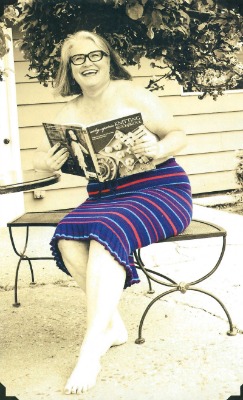 Underground Crafter (UC): How did you first get started knitting?

Marsha: I got started knitting when I took a two week class at Rhodes Department Store in Tacoma,WA.  I was eleven years old.  My girlfriend was taking the class so my sister and I camped on.  I am the only one who continued and took it to the next level.

After that, there was no stopping me.  My next project was a V-neck sweater and then socks for my dad.  I didn’t know much about gauge then. I knit the socks on a #4 needle.  My dad wore them once, but they were too thick for his shoes.  They were really nice with cables.  I took to wearing them as sleep socks from the time I was about 13 to my second year of marriage when my husband asked me to quit wearing them to bed.  LOL.

UC: You’re an active member of a local knitting group in Tacoma.  What is it like to be involved with a knitting group, and what suggestions do you have for people who are considering joining one?

Marsha: I belong to Tacoma Knitters and we meet every Wednesday from 2:30-4:00pm at Fibers, ETC.  It is an informal group.  We help out where necessary, show our projects, etc. We have lots of fun and lots of laughs.

We have one rule….no religion or politics!  (UC comment: I think this rule explains why you have lots of fun and laughs!)

The ladies of March (Liz Tekus, owner of Fine Points Yarn; Becca Smith, owner of bagsmith.com; and Susan Thompson, employee at both companies) from the Knotty Knitters 2013 calendar, wrapped in a Big Stitch afghan.

UC: What is the inspiration behind the original Knotty Knitters for Autism calendar?

Marsha: My grandchildren, Mollee May and Josef Andrew, fraternal twins aged 9 were the inspiration for the calendar.  They both have autism. Mollee is mainstreamed in school as of last year at Skyline and Josef goes to a special class at Franklin elementary.  Mollee and Josef both manifest their symptoms differently.  Mollee still has “meltdowns” and a little echolalia (repeating words and sentences).  Josef does not speak although he is trying very hard.  He spins pieces of paper incessantly.  Both children tend to wander off if not watched continuously.

UC: Tell us about the process of finding designers and models to work with you for this year’s calendar.

Marsha: It was a little difficult find models for the calendar.  (UC comment: It takes a brave knitter or crocheter to bare all for charity!)  Some people say they will and then are no shows.  So this year, I planned for some extras and had just right amount.  The one requirement is that they be able to knit.  We met Becca Smith of the Bagsmith.com at STITCHES last year.  She brought 3 models with her.  Three are returning models, 1 is the granddaughter of another model, 1 is from the Puyallup Knitting Guild, and 2 are from Ravelry.

Designers were a whole lot easier to find.  I had met some on various knitting trips I had been on, some responded to the article in Yarn Market News, and some I just asked.  (UC comment: You can download the patterns donated to the Knotty Knitters here.) 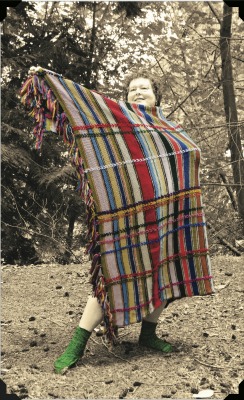 Ms. October (Ola Leonard Kersely) from the Knotty Knitters 2013 calendar, modeling an afghan she made to donate for auction.

UC: How can people help support the project?

Marsha: You can help support the project by purchasing a calendar and/or by purchasing raffle tickets for the afghan that Ms. October is wearing and that she knit.  (UC comment: You can purchase the pattern here for $20 + $5 shipping.  To purchase raffle tickets, which are $1 each or $5 for a book of six, email Marsha at marsha AT marshasells DOT com.  The drawing is scheduled for December 15, 2012.)

UC: What are your have any favorite crafty website/blogs to visit for knitting inspiration?

Marsha: I visit Ravelry every morning to view the new knit patterns and I get lots of emails from yarn stores.  I also subscribe to Vogue Knitting, Knit Simple, and Rowan magazines.

Thanks so much for stopping by for an interview, Marsha!

I read about the Knotty Knitter’s project in Yarn Market News last year, and I immediately contacted Marsha about contributing a pattern.  At the time, I had no idea what this pattern would be.  Oh, and I had never written a knitting pattern ;).  Marsha was very flexible and allowed the designers complete creative freedom in creating a pattern.  Although this freedom was wonderful, I was overwhelmed by all the ideas I was thinking up in my mind and I didn’t start on the project for months.

But then, March rolled around, and Stacey at FreshStitches announced Knit and Crochet Design Week.  Designing is usually an isolated experience for me, so I decided to try my hand at designing with moral support.  The first version of this design was born. 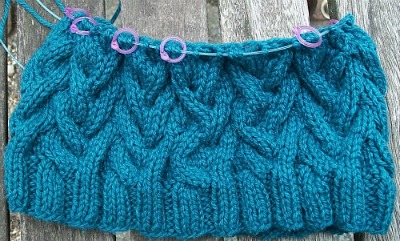 From the beginning, the stitch pattern reminded me of the trail of a sandworm, the creatures who feature so prominently in the Dune series by Frank Herbert.  The yarn I was using was a rich blue, like the eyes of the Fremen and Paul Muad’Dib, and so I called the project Kwisatz Haderach.  Ultimately, I wasn’t very satisfied with the decrease pattern and I ended up ripping back the project since it didn’t have an intended recipient.

In April, during Knitting and Crochet Blog Week, I uncovered this wonderful orange yarn in my stash. 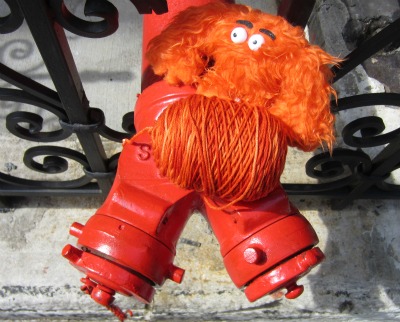 I was inspired to restart the design, and the orange yarn allowed me to maintain my Dune theme because it’s the same color as the desert planet of Arrakis.  I finished the sample at the end of May, and shared it with the world in early June.  Not only am I able to share the pattern to support a great cause, but I got to use up some stash and finish a gift from my holiday crafting list early.