I guess that crocheted motifs are my go to project when I’m feeling stressed, which is how I managed to finish 9 during another busy week. 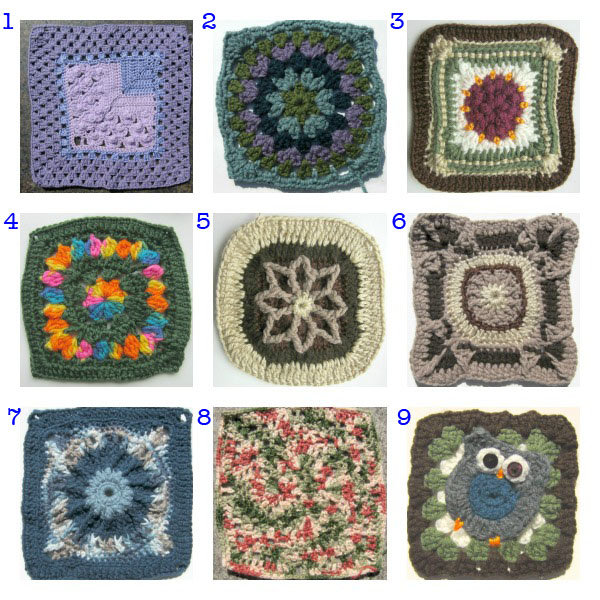 My running total of grannies for charity is now 25, so I have 27 more to go.  Let me tell you a little about these squares.

by Betty Barnden.  The center is actually the block from the book, but to get it up to 12″, I added several additional rounds.  I think the block would look best in one sold color, as it is in the book, but I ran short on that color while crocheting.

2) This is my version of Squaring the Big Circle by Kate Jenks, and 3) is Puff Pastry, a great block by Donna Kay Lacey, who I interviewed a few months back.  I used up plenty of little yarn bits in my version.

4) Here’s another great pattern by Donna Kay Lacey called Bubblegum.  I had a moment of fear when it looked like I ran out of the yarn in the last row, but I was able to find another scrap in hiding to finish off my block.

5) This square is a variation of Precious by Julie Yeager.  I’ve been seeing a lot of her blocks popping up in my friend updates on Ravelry, so I thought I’d give it a try.  6) Then I got creative and designed my own block!  I’m working on a new version now that should clean up the pattern a bit.

7) By this point in the week, I thought I’d try something a little different.  I decided to look for a pattern that was in my collection but didn’t have a picture posted on Ravelry.  Of course, that meant that my version couldn’t have modifications, so this one is straight from the pattern: Square 17 by Colleen Gilbert from Contest Favorites Afghan Squares

.  The pineapple effect would have been visible if I used a solid yarn, but I’m glad I took the chance to use up as much of this variegated yarn as possible.

9) Finally, I tried to add another picture to Ravelry’s pattern database by making my version of the Owl Granny Square by Sarah Zimmerman.  Normally, I wouldn’t have made this block because I always think of owls as being harbingers of death rather than cutesy craft motifs.  It turns out that Sarah’s the only editor on Rav so I can’t add the picture to the pattern database anyway :(.  Any suggestions on what to do with this block?  I sort of feel weird donating it to charity because it has buttons which present a potential choking hazard…

That’s it for me this week.  I wish I could say that I think next week will be more peaceful, but I’m sure it will be equally rushed.  Most likely, that means you will see more grannies from me!