This year, I donated more projects and patterns to charity (and causes) than I have for quite a long time.

I started off 2012 by making 6″ granny squares.  I sent off 40 to Binky Patrol in May as part of the Crochetlist charity challenge.

In June, I hosted the charity challenge for Crochetlist on behalf of Bideawee‘s Manhattan Adoption Center.  I created a pattern e-book, 30 Purrfect Stitches for Pet Blankets, and I donate all of the profits from its sale to animal welfare organizations.  So far, I’ve raised over $180 for Bideawee and the Humane Society of New York!

I also collected about 70 pet blankets for Bideawee. 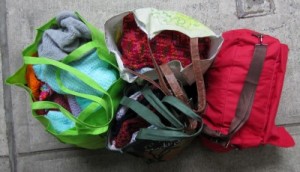 In August, my very first knitting pattern was published in support of the 2013 Knotty Knitters for Autism calendar.  You can read my interview with Marsha Cunningham, the organizer, here.  (And calendars are still available for sale here.) 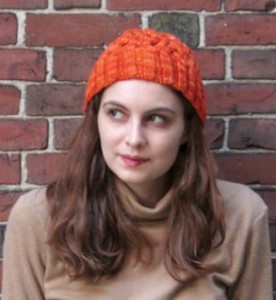 In the fall, I made two hats and also donated a scarf to the Hats 4 the Homeless drive hosted by Lion Brand Yarn Studio.

This year, I made a strong effort to destash.  In addition to using up yarn for new charity projects, this also meant rummaging through my bins for existing projects and yarn to donate.  In September, I donated a bunch of yarn to the Roosevelt Yarnies and Knitters and Crocheters Care. 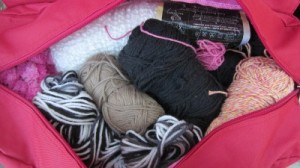 And in December, I mailed off 6 hats, 5 scarves, and 2 cowls I crocheted in years gone by to the Oyate Teca Project, a charity I found through the Friends of Pine Ridge Reservation.  I also included this wool scarf I made in 2012. 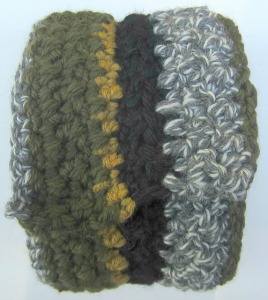 I sent out a very big bear I crocheted in 2008 to a drive for the children of Newtown, CT that I read about on FreshStitches.

I’m not sure why I crocheted an enormous bear (other than because I wanted to try out the pattern at the time), but I’m hopeful that he’s found a better home than squished into a plastic bin in my apartment.

I also packed up 60 (!) granny squares to send to Afghan Squares for Pine Ridge.  These included the charity squares I made as part of the second Year of Projects and a bunch of squares I found hiding in a yarn bin during the summer.  I will mail these out by the end of the week.

I’m not sure I’ll be able to keep up this much charity crafting next year (especially since a many of my donations were actually crocheted years ago), but I’m glad I was able to help out this much in 2012.

I also started a Pinterest board of charities that accept handmade donations, in case you are looking for places to donate.

Do you have a favorite crochet or knit charity or charity project?