It’s amazing what you find out through Facebook.  For example, I had no idea my cousin’s wife was even pregnant until she posted pictures of her newborn, Brooklyn Sophia.

Being of the old fashioned naming sort, I assumed that Brooklyn was an adjective describing Sophia.  (As in “born in Brooklyn” Sophia.)  Later, I came to understand that is her actual name.  I imagine that I should be proud to see my home borough reaching a status like Paris where people are just naming their children after it.  Apparently, my cousin is feeling a bit of nostalgia for the place he, too, was born, but hasn’t lived in for about 20 years.  Either that or he is now a Nets fan.

I love a good baby blanket, and this seemed like the perfect opportunity to try out the Jelly Mould Blanket pattern by Frankie Brown.  I had some hot pink Candy Print Red Heart Super Saver in my stash, and I knew the extra stiffness would help the motifs “pop.” 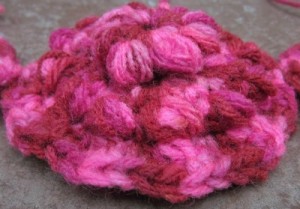 I plan to make this blanket entirely out of stash, so when I run out of Candy Print, I’ll need to decide if I’m using another color for the rest of the blocks or a completely other design.  I do have a good amount of white, which I plan to use when I square up these blocks.

As for reading, I just downloaded Stranger in a Strange Land

by Robert A. Heinlein after a very long wait from the library, so I’ve put aside And All the Stars

.   I recently became interested in Heinlein after seeing his episode of Prophets of Science Fiction.

I have yet to read any Heinlein, which is crazy since he is regarded as a master of American science fiction.  (I did love the film version of Starship Troopers, but I have no idea how – if at all – it relates to Heinlein’s book.)