I’m excited to share finally two secret projects I worked on last winter with you: the Rolling Waves Scarf and the Weekend in the Alps Hat.  Both were published in the 2013 Weekend Crochet Projects issue of Love of Crochet, which is now available.

So let me tell you a bit about the two designs.  I’ll start with the Rolling Waves Scarf.

This long skinny scarf is a great way to practice working with different stitch combinations.  The pattern is actually relatively simple to make.  I had just finished the Ripple Mania CAL, so perhaps I had ripples on the brain when I crocheted the sample.

MC was nice enough to take some pictures of me before I mailed off the sample.  Believe it or not, this is on Christmas Day.  It was unusually sunny, so I had to borrow his sunglasses! 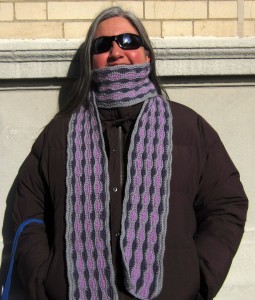 My mom actually picked out the colors for the Rolling Waves Scarf, and I just love how they came together in real life.  I used light purple (Wisteria), dark purple (Mystic Purple), and silver (Space Needle) in one of my favorite workhorse yarns, Cascade 220 Superwash, for this design.

Originally, I proposed it for the Holiday issue, so initially I was thinking about seasonal colors.

I’m so glad it was switched to the Weekend issue, because the colors are much more my style now!

My other pattern included in the magazine is the Weekend in the Alps Hat.

I had the chance to use a new-to-me yarn, Schoeller + Stahl Limbo, for this sample.  I was inspired by snowflakes for this hat, so I added an edging that is a bit unusual. 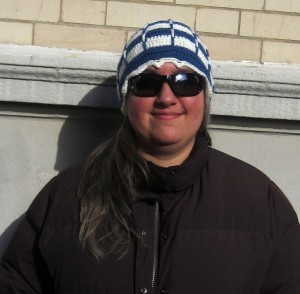 As you can probably tell, this picture was taken on the same day as the other sample ;).

I really like the top of this hat (so if you’re short, this might be the design for you since more people will see the crown of your hat).

I confess that I picked superwash wool yarns for both designs because I planned to repurpose the samples as holiday gifts.  The fact that both are made with easy care yarns gives me more flexibility than if special care was required.

The more I look at these pictures, though, the less I’m sure about that gift idea.  The purples in the Rolling Waves Scarf are really calling to me!