On December 1, I set a goal of finishing a project every other day in December.  With just a few days to go, I’m happy to say that I did pretty well.

First off, I finished three secret for future publication.  (You can read vague details on my Ravelry project pages here, here, and here.)  I can’t show pictures of the finished projects, but I can share the yummy yarns that I used.

All of these were new-to-me yarns, and I really enjoyed discovering each one!  On the left is Imperial Yarns Columbia, which is a great workhorse yarn, but with a bit more softness than you would expect for a sturdy, worsted weight, wool.  In the center is Rowan Big Wool, which has a delightful feel as well, and it works up very quickly since it’s a super bulky yarn.  And on the right is Valley Yarns Valley Superwash.  The colors in real life are much richer than what you see on the screen.

And then there are the projects I already shared on the blog, a crescent shawl I made for my sister with Mountain Colors Twizzle, which has stunning colors and a scrumptiously soft feel (thanks to the silk content); the plain, ribbed hat I knit for MC using Studio Donegal Soft Donegal; and the brimmed hat I crocheted for my friend using Patons Shetland Chunky.

I did manage two other finishes in December.  Both were inadequately photographed in the holiday rush.  The first was a lap blanket for my grandpa, crocheted with two strands of what Ravelry calls “vintage” Bernat Softee Chunky that I bought at the famous Smiley’s Manhattan yarn sale. 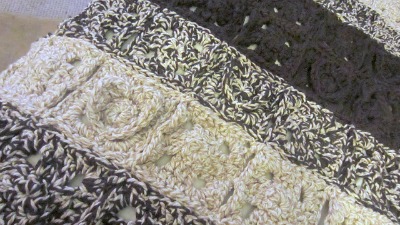 I created an ombre effect by changing the strands I held together for each row.  I also made a little heart motif on some of the squares, since my grandpa just had a pacemaker installed.  Unfortunately, I didn’t have time to make new projects for my other relatives, so I dug through my collection to find some existing projects to gift. 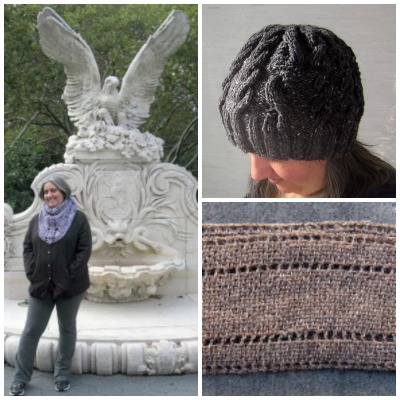 I gave my grandma the original sample of my Pineapples for Everyone Shawl pattern, my uncle the hat I originally knit for MC (that was deemed “too fussy”), and my aunt a cowl I made as part of a CAL in January.

And then on Christmas Day, I did the last finishing touches (but forgot to photograph them) on the headband for my sister’s boyfriend.  It’s something he could wear to a football game in his current home (New Orleans) or in the new city he’ll be moving to after graduation (Houston).  Each side has a different flavor. 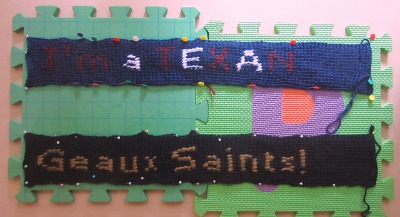 At this point, I’m averaging something closer to a finish every 3 days, which isn’t bad for the holiday season.  And, I’m on my way to (hopefully) finishing ten projects by the end of the month.

I have one more secret project to knit.  The yarn, HiKoo Simpliworsted, was a bit delayed in arriving and it looks lovely. 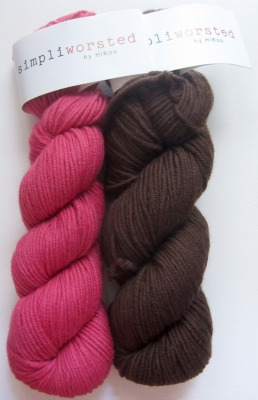 And I received a fabulous gift from Kim Guzman (interviewed here) on Christmas Eve.  She sent me some of her famous apple butter (yum!) and packed the box with yarn (the now discontinued NaturallyCaron.com Country).  So with that, I started a baby blanket for my cousin (who, according to Facebook, may already be in labor). 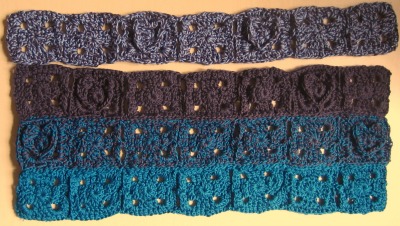 This is a refinement of the pattern I made for my grandpa, where the hearts are a bit pointier and the squares are easier to join as you go.  The color that looks brown in the picture is actually a dark purple.

In other yarn related news, my sister gave me some yarn from her recent trip to Montenegro for Christmas. 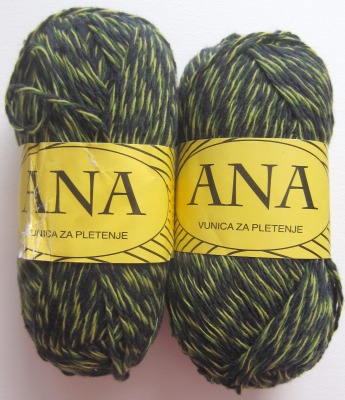 It’s now official that my yarn stash is better traveled than I am, since I also have skeins from Italy and Patagonia.

How did your holiday crafting go?