Happy New Year!  Best wishes for a joyous and creative 2014!

You can find more information on the 2014 Sampler MKAL here, and can order the pattern here.

You may have noticed that the banner and buttons for the 2014 Sampler Mystery Knit-a-Long feature pictures of 220 Superwash yarn by Cascade Yarns.

When I was developing the pattern, I made my first sample using this beautiful, buttery off-white, called 1915 Banana Cream. 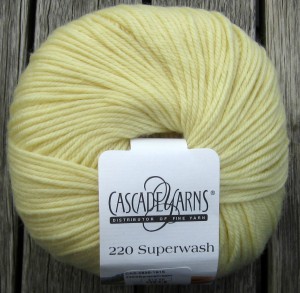 And my second version will combine Banana Cream with 851 Lime and 840 Iris. 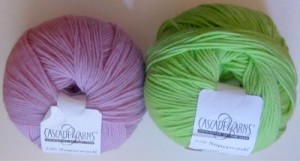 I bought this yarn at my favorite local yarn shop, Knitty City.  As with so many yarns in my stash, these skeins of Cascade 220 Superwash originally started out with different purposes, but they were destined to be part of this MKAL instead!

I’ve worked on quite a few projects with Cascade 220 Superwash in the past two years.  I used it to design three crochet patterns, the Mod Square Blanket, the Rolling Waves Scarf, and the Rectangular Sampler Blanket, and I also knit it up into a Mother’s Day gift and a hat for my Dad.

I’ve found it easy to work with and it holds up in the wash, which is important for a baby blanket.  Cascade 220 Superwash also comes in a fabulous assortment of colors.

Cascade Yarns is sponsoring the January giveaway for the MKAL with 3 skeins of Cascade 220 Superwash in 817 Aran. 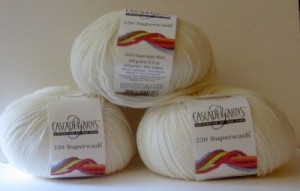 These three skeins would make up half of a baby blanket sized sampler, and Aran would go wonderfully with any color combination you choose for the rest of your project. 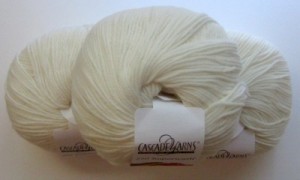 To enter the giveaway, download the Underground Crafter 2014 Mystery Sampler here (with a 50% discount through January 15) and introduce yourself (in the Ravelry MKAL chat thread, on the Underground Crafter Facebook page, or by Tweeting @ucrafter) by 11:59 p.m. Eastern on Wednesday, January 29, 2014!  One winner will be chosen at random on or about January 31.

Thank you, Cascade Yarns, for sponsoring this month’s giveaway!