Last week, I finished my last Year of Projects post of 2013 with a cliffhanger: how many more projects could I complete in 2013?

I ended up finishing just one more project, a baby blanket for my cousin’s newborn.  (My cousin was in labor when I wrote the post, and has since delivered a healthy baby girl.  Yay!) 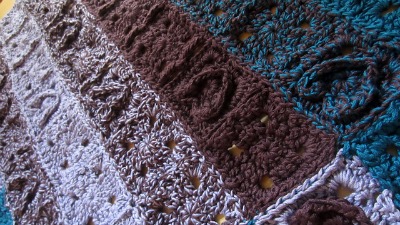 I originally had a plan for a symmetrical blanket.

Each square was made holding two skeins of yarn, with the colors blending into each other.  I planned to have an “x shape” of hearts radiating outward from the center.

Unfortunately, my yarn calculations were a bit off, so I had to move on to Plan B – an asymmetric design with an “L shape” around one edge – to work with the colors I had left. 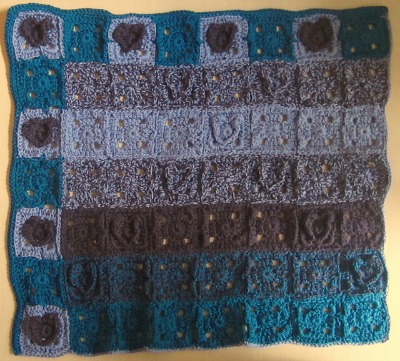 I like how it turned out.  I should mention that the yarn that looks brown in the picture is actually purple, and the colors look much brighter and more attractive in real life!

And with that project, I came to the end of my yarn usage for 2013.

Overall, I worked up about 1,700 yards less than in 2012 (which is no surprise, since I made many fewer projects in 2013), but I knit a lot more (about 19% of my total yarn usage, compared to about 4% in 2012).  That trend will probably continue this year, since I’m planning to make up a few extra samples of my 2014 Sampler Mystery Knit-a-Long blanket.

My plans for the next half of the Year of Projects are to:

I’m keeping my goals a bit fluid because mainly I want to keep working on using my stash and getting more patterns ready for publication.  My original goals were all about developing patterns and self-publishing, and I plan to keep on moving in the same direction.

What are your plans for the first half of 2014?