Temperatures are dropping in New York City.  Yesterday, it was so cold I could barely stand being outside for even a few minutes – which I did anyway, just to take pictures for this blog post (and to buy cat litter).

I bundled up with my current favorite cold weather scarf, my sample for the Bobble Diamonds and Posts Scarf.  This is one of my first designs, and I didn’t actually plan the size so much as fall into it.  It happens to be perfect for wrapping around 3 times and tucking, for when it’s so cold you don’t even want one little bit of wind to touch your neck. 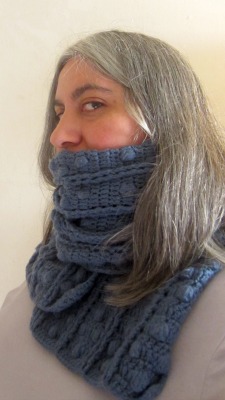 I took a little selfie on the way out so you can see what I mean.

My biggest crochet goal for the next week is to finish my 2013 Temperature Scarf (free pattern here) by Monday.  The reason: the scarf tracks 2013 in temperature and I want to finish it in one year.  (According to my Ravelry notes, I started it on January 13 last year.)  I have high hopes that this will be my new favorite cold weather scarf.

Believe it or not, this picture, which doesn’t even include the entire scarf, is the best shot I could get.  The winds kept curling up the edges and it was just too cold to stand outside much longer.  The scarf is currently 54″ long and about 9″ wide, and I’ve crocheted one row for every day through September 8.

When you last saw this scarf, it looked like this.

In November, on Small Business Saturday, I stopped into one of my local yarn shops, The Yarn Company, and bought a skein of madelintosh tosh vintage in their exclusive colorway, Midnight in Manhattan. 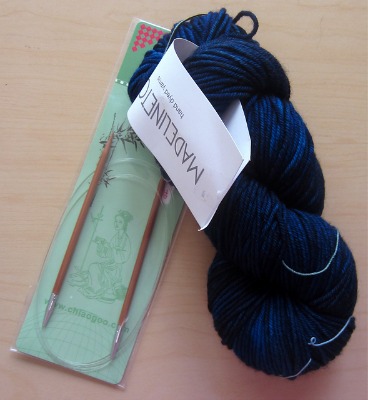 (Of course, then I also had to stop into my favorite local yarn shop, Knitty City, to get a set of ChiaoGoo bamboo needles, also pictured above.)  I liked the yarn because it’s an exclusive colorway, so it seemed very personal to my neighborhood, and it’s blue, so I thought it would work with the other colorways pretty well.

I ended up taking a middle ground.  I ripped back 37 rows to the point in August where there had been 44 of those 75-87 degree days.  So the first half of those days were crocheted with Molly Girl Chart Topper in Aella (formerly known as Yarn Monkey Productions Supersaki), and the next half will be finished with Midnight in Manhattan. 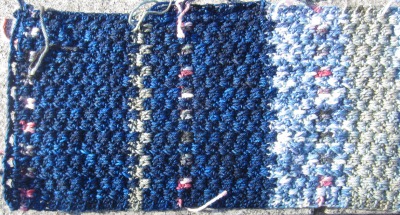 At this point, I think I’ll just continue.  After all, I need a really warm scarf – it’s freezing out.  And I’d like to make a matching hat with some of the leftovers, so I’ll need to see what’s actually left before deciding on my hat pattern.  Plus, one of the reasons I decided to make this scarf was to experiment with color.  And, in case I still need more reasons, I really, really don’t want to pull out rows again. 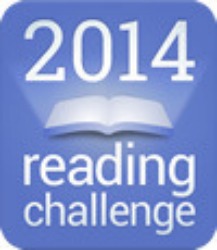 As for reading, I fell (slightly) short of my 2013 Reading Challenge goal, finishing 63 instead of 65 books.  I decided to keep my 2014 goal the same, at 65 books.  I already finished my first two books of the year, including The Goldfinch

by Donna Tartt.  I understand the criticisms of the book, but I found it really compelling and ended up staying up late (quite a bit late) for several nights to finish it.  However, I now feel the need to take a break from 700+ page novels examining the human condition, so I’ve started reading Knitwear Design Workshop: A Comprehensive Guide to Handknits

by Shirley Paden.  I’m not sure what book will catch my fancy next – possible one of the many already waiting for me in my Kindle Fire…