I’m excited to say that I did finish crocheting my temperature scarf this week.  The 113 remaining rows just flew by. 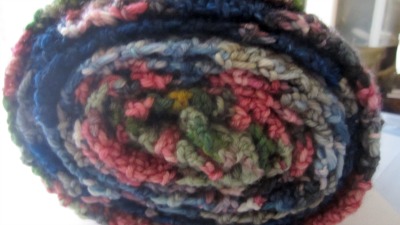 I ended up using 8 different colorways for this project. 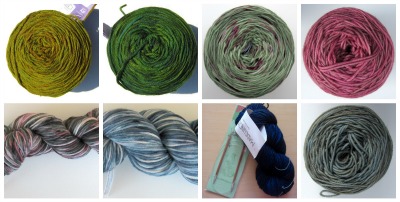 Four of the skeins (Dream in Color Classy in Spring Tickle and Happy Forest and madelinetosh tosh vintage in Fragrant and Cove) were purchased at my favorite local yarn shop, Knitty City; two others (Miss Babs Yowza–Whatta Skein! in Violets in the Grass and madelinetosh tosh vintage in Midnight in Manhattan) were picked up at another local yarn shop, The Yarn Company; and I bought the two remaining skeins (Molly Girl Chart Topper in Anastasia and Aella) from a local dyer at the North Jersey Fiber Arts Festival. 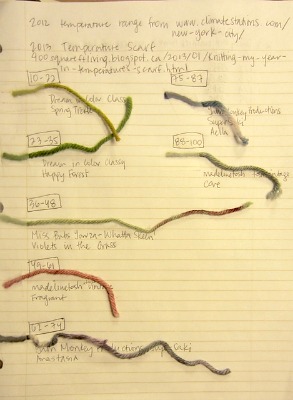 My original plan called for the use of just 7 yarns, but since 24% of the year’s dates fell into the same temperature range, I ended up running out of yarn for one of the temperature ranges and adding another yarn.

Since I was crocheting at a significant lag (I recorded the temperatures throughout the year, but ended up crocheting most of the scarf after November), I was able to make a substitution.  If I were to make another temperature scarf, I’d use a shorter range of temperatures, perhaps 8 degrees for each color. 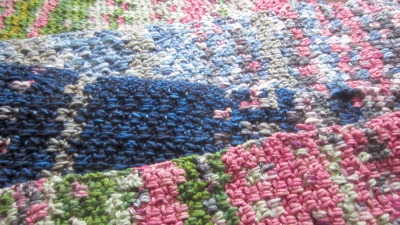 Of course, this would mean that some colors wouldn’t be used at all.  As it stands, the Spring Tickle (representing the coldest temperature range) was only used for two rows.

One thing I’m happy I didn’t do was assign colors based on their association to the temperature.  Many of the temperature scarves I’ve seen use blues for lower temperatures and reds for higher temperatures, for example.  I just arranged my colorways in an order that was pleasing to my eye when I first started this project, and then assigned the temperatures in that order. 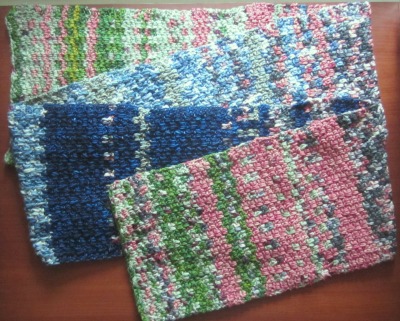 Another thing I would do differently (though I LOVE how the Violets in the Grass colorway looks in this scarf) would be to only use yarns with a very similar thickness.  The Miss Babs yarn is much thinner than the rest, and I used a larger hook for those rows to keep the gauge similar.

Now that the scarf is blocked, I’d really like to add some buttons.

The stitch pattern I’ve used for this scarf sort of naturally forms a row of button holes at the edge.  But with all of these colors, it’s hard to pick a good set of buttons.  Naturally, I dug through my collection first.

I’m leaning towards using the blue square buttons at the top left and maybe the black and white polka dots.  I don’t want to seal this up permanently as an infinity cowl/circle scarf, but I think I’m less likely to wear it as a scarf, so buttons seemed the perfect solution.

Or, should I just go out and try to find buttons specifically for this project?  What do you think?