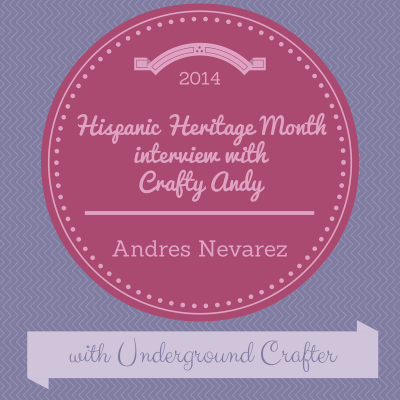 I’m excited to kick off my 2014 Hispanic Heritage Month series with an interview with Andres Nevarez, also known as Crafty Andy. Andy is a crochet and knitting designer and blogger. He can be found online on his Crafty Andy website and blog, Pinterest, Facebook, on Twitter as @Crafty_Andy, Flickr, and Ravelry (as CraftyAndy and on his designer page). Andy also has some great videos on YouTube, and his Tapestry crochet work was featured on Carol Ventura‘s Tapestry Crochet blog here. (I previously interviewed Carol here.)

All images are copyright Andy Nevarez unless otherwise noted, and are used with permission. Click on the photos to visit that pattern’s page on Ravelry.

Andy: I honestly don’t remember when I learned to crochet, but I picked it up around the year 2000 or so. I had some help from a friend that knew how to crochet well. I did a lot of pot holders and wash cloths, then graduated to afghans.

I learned to knit around 1988, when I was on bed rest for about a month. I asked a friend to take me to Woolworth’s to get a book and some needles. I taught myself to knit, and believe it or not, my first project was a sweater.

Andy: The inspiration to start designing came from the fact that I love hats. My love for hats sent me into a search for men’s hats and I did not like anything that I saw that was crochet. The crochet hats that I found on the internet were very interesting, from Kufis, toques, beanies to fancy kippahs. I wanted something stylish, unique and challenging and that is how I got into designing Tapestry crochet hats.

There were a lot of knitted hat patterns, but I was only focusing on making crochet hats at the time. I started crocheting hats and decided to go into Tapestry crochet. At the time, I did not know it was called that. I was bored with just one color and decided to play with two colors in hats. Almost everyone that knows me knows me by my hats. Carol Ventura was the first Tapestry Crocheter that I was inspired by. These are some of my Tapestry crochet designs.

UC: You have roughly an equal amount of crochet and knitting patterns. Is that something you have done intentionally or just a happy accident?

Andy: More intentionally than accident. I have so many ideas for hats in my head, either in knit or crochet. Whenever I am looking at yarn, the first thoughts that cross my mind are how can I make a hat out of these skeins, what shape will it take? The same goes with lace scarves for men. What kind of lace pattern can I make with this yarn that I want to wear.

UC: You talk about living with AIDS and being a long-term HIV survivor on your blog. What kind of reaction have you received in the yarn crafts community about your status, as well as your fundraising efforts for Project Open Hand?

Andy: My status as HIV/AIDS person does not come up, unless I see it fit to come into the picture. I guess the biggest surprise is the fact that I have an AIDS diagnosis and I “look normal” or “healthy,” whatever that means. I do not complain about things unless it is to my doctor, which is the person I need to complain to or rather than complain, let him know what is up with my body, my aches and pains. I am not a complainer. I make the best out of everything in my life and being HIV/AIDS is just a piece of the 1001 pieces puzzle that is Andy.

My Project Open Hand efforts have not raised lots of money yet. My friend Kyle Kunnecke mentioned that he was making a hat called Cause and would ‘t it be nice if there was a crochet version. Well, what a great opportunity for me to give back and take a colorwork challenge. I am hoping my hat pattern will outlive me for hundreds of years or until there is a cure.

UC: What was the yarn crafts scene like in your community in Puerto Rico when you were growing up?

Andy: Well, people – men, women and children – that craft with yarn are artisans or apprentices. There are different levels of craftsmanship and techniques.   Everyone likes to see people make things by hand. People are always curious about how things are made.

UC: How does it compare to the current scene in San Francisco?

Andy: I have had a mostly positive experience with my crafts. A lot of people look down at crochet, believe it or not. I consider myself to be the Tapestry Crochet Ambassador and nobody puts down my work. Most people that see one of my hats think that they are knit, not that it matters. San Francisco makes me feel like an Artisan. I make hats that are wearable art, sculptures made out of yarn, a mosaic of color to make the mind wander.

UC: If you’re still in touch with crafters on the island, do you know anything about the current yarn crafts scene there?

Andy: The times that I have knit or crochet in public on the Island, I get so many people that come to take a closer look at what I am doing. They ask me questions and admire my work, and they talk to me with a silent kind of respect. People actually acknowledge the fact that I am Artisan. People in San Francisco are very kind as well. They are not really surprised that I am a man that crafts, they are more surprised that a lot of my pieces are crochet.

The one thing I know about the craft scene on the Island is mundillo. This is a craft of handmade bobbin lace and is mostly done by women. I have never seen a man making mundillo.

UC; Does your cultural background influence your crafting? If so, how?

Andy: Of course it does. There are some [Hispanic] artisans that have inspired me and I still get inspiration from: Juan Gris, Pablo Picasso, Frida Kahlo.

‘s A Treasury of Knitting Patterns

Andy: I visit Tapestry Crochet, Men Who Knit, TECHKnitting, and Ravelry. I get a lot of inspiration from what surrounds me as well. Even though my first language is Spanish, I have no idea how to crochet or knit in Spanish yet.

UC: What’s next for Crafty Andy?

Andy: I want to share my love of crafts with other people. I am an introvert of sorts, yet my desire to connect with people is bigger than my introversion. I live life to the fullest and live without regrets. There are plenty of pattern ideas for hats and scarves in my head, waiting to come out and see the light. I can say there will be more knitted lace scarves and stoles from me. There will be more Tapestry crochet hats and knitted hats.

I have been featured at the Malabrigo website  and I have a pattern published by Skacel. Is there a book in my future? Probably so, but the way that it will probably happen is that I will start writing and will not stop until it’s done. It will be in spurts, which is kind of a contradiction to what I just said, but that is my kind of energy. I work when I am inspired, and in the meantime I collect data.

Thanks so much for stopping by, Andy, and for sharing your designs and artistry with us!