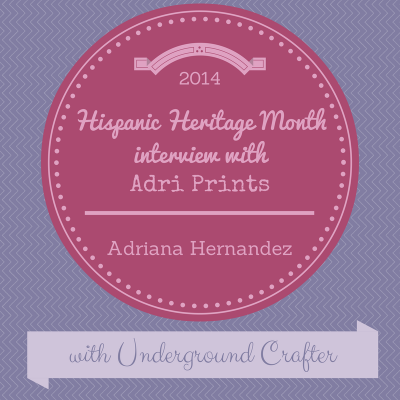 I’m excited to continue the celebration of Hispanic Heritage Month by interviewing Adriana Hernandez from AdriPrints. Adriana is a Cuban-American (mostly) knitting and font designer who lives in Germany. Adriana can be found online on the AdriPrints Press blog: Adri Makes a Thing or Two, Ravelry, Twitter as @adriprints, and Facebook. All images are copyright Adriana Hernandez unless otherwise noted, and are used with permission. Click on the pattern image to link to the Ravelry design page. 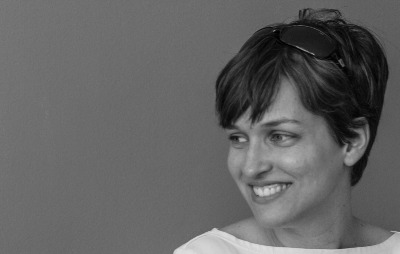 Adriana: My maternal grandmother taught me to crochet when I was four or five years old. First I learned to finger-crochet, and then later I was given one of those silver metal crochet hooks to try it out.  I was a kid who loved handicrafts so I was given fun stuff like bead looms, origami paper, doll-making supplies, and latch-hook rug kits for my birthday.

Knitting, though, came much, much later.  I learned at three different times and it finally stuck on the third go.  The first was an ex-boyfriend, and I picked up the steps really quickly, but dropped it when we broke up. Second was my aunt who taught me on a visit to the west coast. Tia H carded, spun, and knit from her angora bunnies.  What an inspiration!  And finally, one of my house-mates in grad school took the time to sharpen my skills and taught me to purl.  She also gave me yarn and needles.  What an enabler!  Thanks, Ona!

Adriana: I’ve been involved in the design world for a long time in one form or another.  I originally studied Set Design for Theatre in university and Industrial Design in grad school.  But, I really connected these skills with knitting when I found myself changing almost every pattern I knit to better suit my tastes… Then I figured I might be onto something.  Picking apart the math and writing style of each pattern I encountered taught me a bit about the conventions of the industry, and the rest is history.

UC: All but one of your published designs are for knitting. What do you enjoy about knit designing?

Adriana: I was just talking to someone about this.  I really like the process.  I’m such a process oriented person that I love the analog aspect of it all… schematic + words and numbers + yarn = garment or accessory.  I love that!  The difficulty with crochet design is that I see it as a free-form textile, so it’s hard for me to reign it in in the form of a design.  I find knitting easier to tame with language, symbols, and schematics.

UC: You’re also an illustrator and designer, and the creator of one of the few inexpensive crochet symbol fonts, StitchinCrochet. What led you to create this font? Who is the ideal user?

Adriana: Necessity is what led me to create the font.  There wasn’t anything I liked out there when I started designing.  And to be honest, I thought I’d be designing more for crochet, but then knitting took over my life.  So, when I was looking at symbol fonts, I realized there were plenty of knitting fonts that were functional, but a huge gap in crochet.  So, I made one.  I should mention I had already been dabbling in novelty fonts by that point.  The ideal user for StitchinCrochet is someone looking for a library of glyphs to play with their vector imaging software (Illustrator or Inkscape).  That’s not to say people have found lots of other fun ways to use it.  I love seeing what people do with my fonts.

UC: On a related note, many indie crochet and knitting businesses, including designers, bloggers, and makers, struggle with issues related to graphic design. Do you have any recommended resources for graphic design to share with them?

Adriana: Although I do graphic design, I won’t say that’s my strongest skill.  I would recommend subscribing to high-design blogs that feature writers (who also design) who are obsessed with graphic design (like Graphic Exchange) or typography (like Typophile).  There are people who are already curating the design world for you.  You don’t have to reinvent the wheel, thankfully.  Also, there are great online courses on lynda.com and tutsplus.com on basic design skills and conventional uses of type.  That is one thing that makes me cringe instantly when I buy or download an indie pattern… bad typography choices.  Know your audience, and be kind to them.  The end knitter (usually) does not have time to squint through overly elaborate script or teensy weensy type.

UC: Like me, you’re Cuban-American, but you’re currently living in Germany. What was the yarn crafts scene like when you were growing up? How does that compare with the current scene in Germany?

Adriana: I don’t think there was a yarn crafts scene in my circle of friends.  Maybe there was a bit of a general crafts scene, but that’s a stretch.  I remember getting into trouble for selling those lanyard keychains as well as those knotted bracelets made with embroidery floss.  Heheh.  In High School, I know we grunge fans were not afraid to cut up a t-shirt or two.  Safety pins seemed to be the accessory of choice, but I guess an actual yarn crafts scene in my age group was non-existent growing up in Miami.  Only my abuelas (grandmas) and my tia-abuelas (my great aunts) were into it, and so I was, too.  I loved sewing, crocheting, and getting into what they were into. I hung out with my older relatives a lot since we all lived in the same neighborhood.

Germany is as different as can be from where I grew up.  People that are my age had knitting in school.  It was a discreet lesson taught to them by a teacher.  So you’ll find people who love it, and others who hate it because of the associations.  When I got to Munich 6 years ago, people would gawk at our SnB when they’d see us knitting through the window of whatever cafe we were at.  Some even stopping to photograph us.  Now, it doesn’t happen so much.  I think crafts are no longer associated with Omas (grandmas) and the elderly.  I think it’s pretty mainstream here, and there are so many knitting groups to choose from as a result!

Adriana: Other from my love of bright colors, I’m not sure how much my cultural background has affected my crafting.  Perhaps, it’s too deeply ingrained in my psyche for me to be able to pick out its influences?!  Hahah!

.  I think I cried with happiness when I read through that book.  It was everything I was looking for as a beginning designer.  I actually read it cover-to-cover even though it’s a reference text.

Adriana: I love Crafty Gemini, who is also from Miami, and for anyone wanting to learn to crochet, she’s doing a series on her blog.  For knit-spiration, I look to the runways and to the history books.  One of my fave sites for historical inspiration is The Dreamstress, and her Monday “rate the dress” series.  Super fun!

UC: What’s next for you?

I hesitate to talk about upcoming projects in any definite way because being a new mom is kicking my butt!  I’m getting used to the ever-changing variable that is my baby boy.  So, I’ve got plans, but he laughs at them. 😀  I’d like to revisit all the patterns whose rights have reverted to me and refine them.  We shall see if I get to it this year.  More likely, I’ll put out a new font or maybe I’ll get to work on submissions to publications.  Judging from this past week, though, it’s a toss-up on whether I can manage the concentration required to work on a pattern with a lot of grading involved. Wish me luck!

Good luck, Adriana! Thank you for taking the time to stop by and share your story!