Earlier this year, my mother had a business opportunity to travel to New Zealand. My sister had just recently finished law school and was able to go with her. They asked what I would like them to bring me back, and naturally, I said yarn.

Side note: You know you’re a yarn addict when every country is reduced in your mind to its capabilities as a fiber producer. (On a more serious note, apparently declines in wool demand are causing problems for New Zealand’s sheep farmers, according to this recent New York Times article.)

When they returned from the trip, I was presented with exciting yarns in brands I had never heard of before.

But, here’s where things get tricky. As soon as I opened up the Loyal, my sister said it was intended was for a scarf. For her.

Somehow, my request for an extra special gift – a unique/inaccessible (to the American market) yarn from the world’s third largest wool-producing country – turned into a job.

If you’ve ever made crocheted gifts, you know what I’m talking about here. Because you love to crochet, anyone and everyone feels entitled to ask for (or, rather, demand) handmade gifts from you. As if that weren’t enough, the gifts have to be customized to their needs.

I’ve made many crocheted gifts for my younger sister before. You may remember this double bed sized granny square blanket, in the colors of the New Orleans Saints, which she asked for as a housewarming gift when she went off to law school.

It took five months to finish. I’m assuming its still in use, since I recently got a text message asking about washing instructions.

And, speaking of text messages, I started receiving them sporadically after I was gifted the yarn. Most messages would start with “I’m sure you haven’t started the scarf yet but…” and end with a picture of something she did or didn’t want included in this famous scarf I would be making for her from my “gift.”

Although this could have turned into an opportunity to talk to my sister about entitlement, assumptions, and gracious gift giving, it didn’t. I decided to actually take this beautiful yarn from a land I’m unlikely to ever visit and convert it into a scarf for her.

However, none of her pictures were suitable. You see, as a non-crocheter/knitter, my sister has really no idea what can be made from 3 skeins of yarn totaling less than 350 yards, especially when she wanted me to hold two strands together for a tweedy look.

And, since she’s now living in Houston, I had a hard time understanding why she might need a double stranded scarf. (Apparently, years of living in the harsh climes of New York City has made me a bit biased about what constitutes “winter.”)

So, I decided to create something different. I’m calling it Tweedy Pineapples for now. 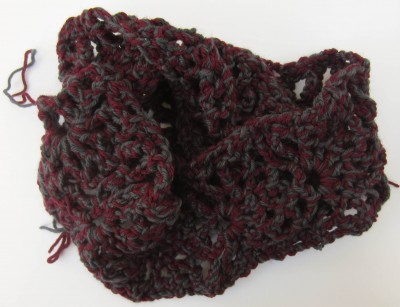 It measures about 5″ x 40″ long off the hooks, but I’m sure things may change once I add the border and block it. 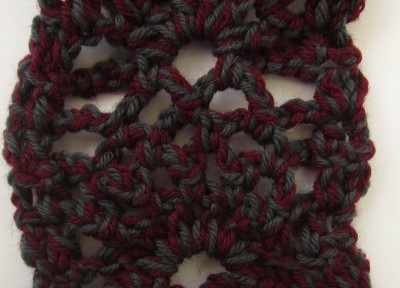 Even before blocking, you can see the little pineapples doing their thing.

By the way, I really liked the yarn. Too bad there’s barely enough left to make anything for myself. On the plus side, this makes the second Christmas gift I’ve finished so far. And I still have the Opals to try out. 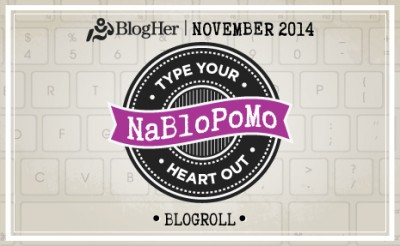