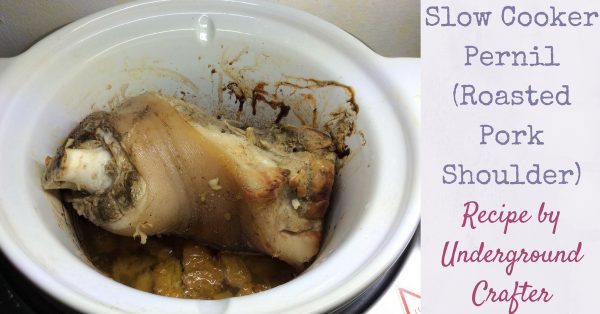 I’m excited to share my easy recipe for slow cooker pernil, or “roasted” pork shoulder. I won’t over-hype it, like I see a lot of bloggers do, by claiming it is the “best” recipe for pernil. (That honor surely goes to an elderly Cuban or Puerto Rican lady somewhere.) But, it is yumlicious and also much simpler than the other recipes I came across online, so here it is!

This post contains affiliate links. I may receive compensation (at no added cost to you) if you make a purchase using these links. Supplies for this project were generously provided by Daylight and Fiskars.

I started working on this pernil recipe last summer. (For some reason, I always crave my childhood Cuban favorites in the warm weather and my childhood Italian favorites in the cold weather.)  MC does not always love my forays into experimental roasting in the blazing heat, so naturally, the slow cooker becomes our dearest friend once the weather warms up.

Since I never did get a chance to talk with my paternal grandmother about a recipe for lechón or pernil while she was alive (and the lechón recipe in the Estefan Kitchen was definitely geared at someone with a much larger oven), I turned to the internet for help. I found some recipes that told me to take off the skin before slow cooking (which is much harder than it sounds). Since I have yet to insure my hands from accidentally self-inflicted knife wounds, I decided that keeping the skin on until after cooking would be best. (Although I did once spend an hour wrestling over a pork shoulder, knife in hand.)

Other recipes wanted me to marinate the pork shoulder overnight. While that did have some impact on flavor, for me, it wasn’t enough to make it worth trying to squeeze the crockery from the slow cooker into our apartment-sized refrigerator over night. (You can read more tips for living with a small kitchen here.) 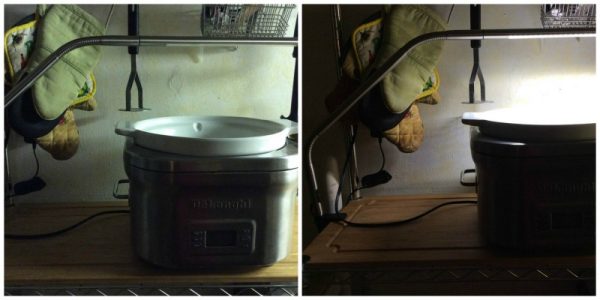 … on the left is how my kitchen is lit in real life. Not exactly conducive to photographing slow cooker recipes-in-progress. (But wait, you’re saying. What about this recipe and this recipe? Hahaha, fooled you. Those are prepared in my mother’s well-lit kitchen. However, she is not a huge pernil fan and I thought she would’nt want to come home from work to the smells of 8 hours of slow cooking pork in her apartment. Yum.)

Back in January, I met the folks from Daylight at the Creativation show, and they sent me the Slimline LED Table Lamp to try. You can see from the picture on the right how much of an impact it has in terms of light, as well as how small it is. To give you a better idea of how it works, I didn’t edit any of the photos in this recipe for white balance or exposure. (I did crop and straighten them, though.)

The Daylight Slimline LED Table Lamp is designed with crafters in mind, so its main purpose in my household is for crocheting at night without overwhelming MC (or the cats) with light. It just so happens that it also makes a great lamp for photography because the lighting mimics natural light for color matching (and to reduce eye strain). Even though the shipping company had tossed around the box quite a bit before it got to my doorstep, the lamp was packaged very well so it was not in any way harmed. I was able to snap the pieces together easily (without even reading the manual!) and clamp it on our new baker’s rack. It is surprisingly lightweight and disconnects quickly after an 8-hour slow cooking session so I can attach it elsewhere for my next project. (You can also buy the base separately to convert it into a floor lamp if you’d like.) The best part about using the Slimline LED Table Lamp for cooking is that just a very gentle tap on the power button turns the lamp on and off. When working with raw meat, this was a huge help because I didn’t want to get any contaminants onto my beautiful lamp! I could just tap the lamp with the side of my arm if I needed more light.

And, now, onto the recipe! 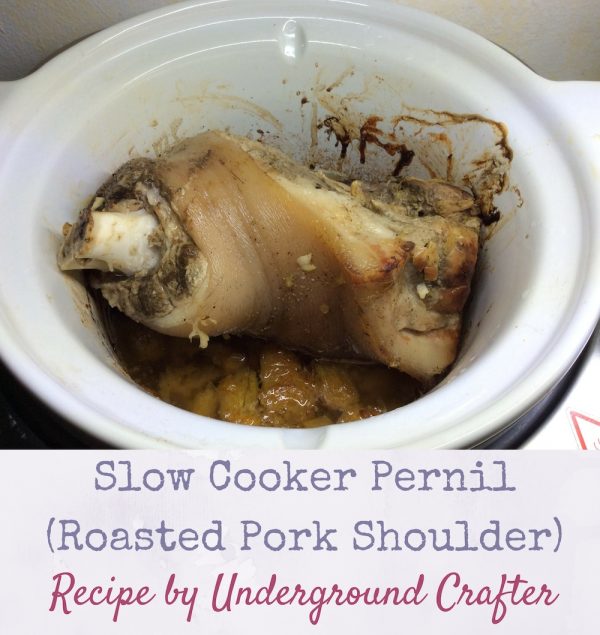 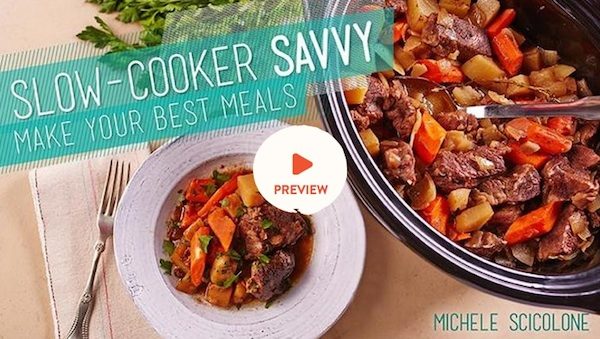 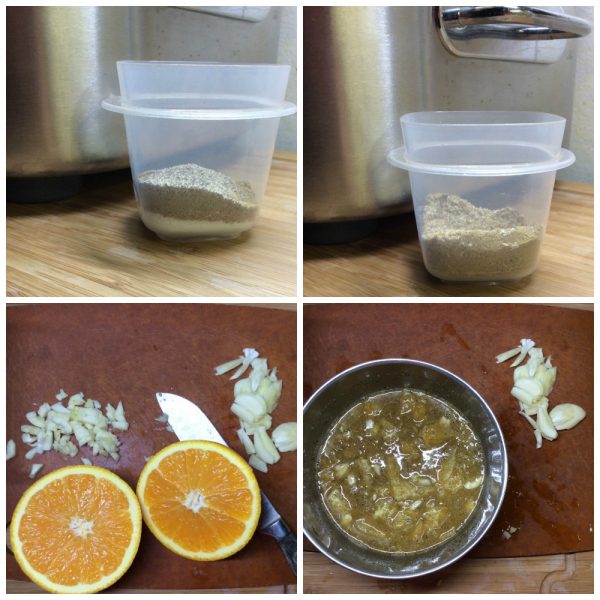 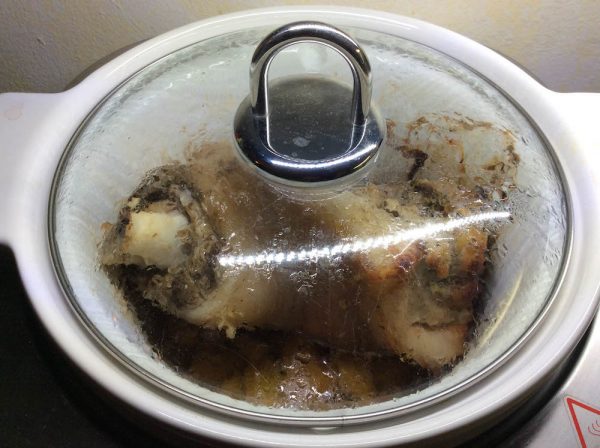 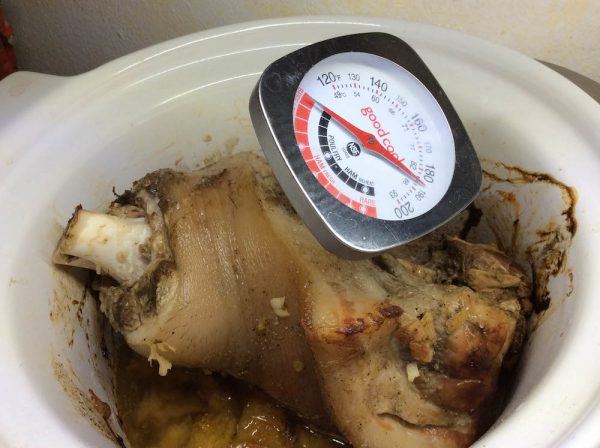 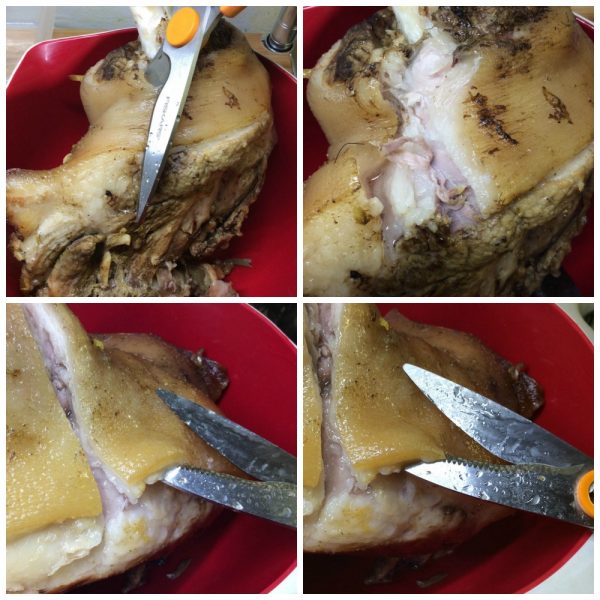 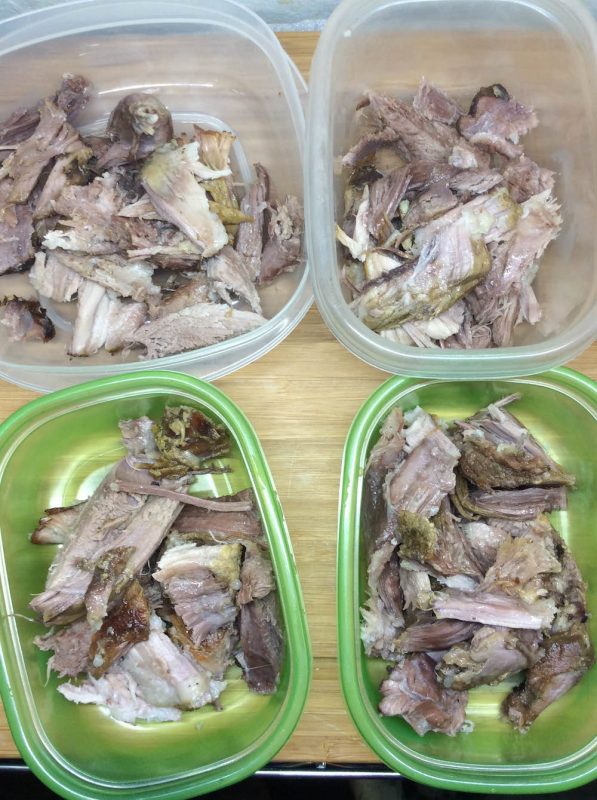