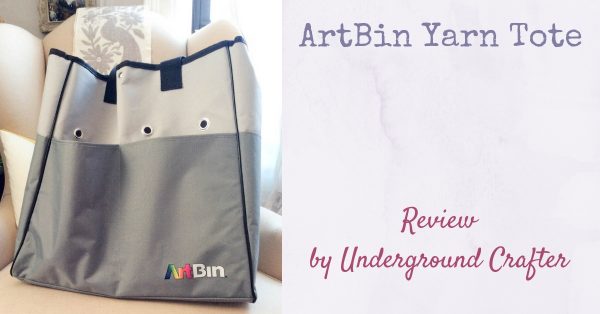 If you like to crochet (or knit) big projects using several colors of yarn, I may have found the perfect project bag for you. Read my detailed review of the ArtBin Yarn Tote for more details!

This post contains affiliate links. I may receive compensation (at no added cost to you) if you make a purchase using these links. A free sample of the ArtBin Yarn Tote was provided to me by Flambeau, Inc. Although I accept free products for review, I do not accept additional compensation, nor do I guarantee a positive review. My reviews are based entirely on my honest opinions.

My dad is an artist and my mom works with commercial artists, so ArtBin is brand name that I’ve known and trusted since childhood.When I first saw the ArtBin Yarn Tote at Creativation, the annual trade show for the craft and hobby industry, back in January, I had high hopes. 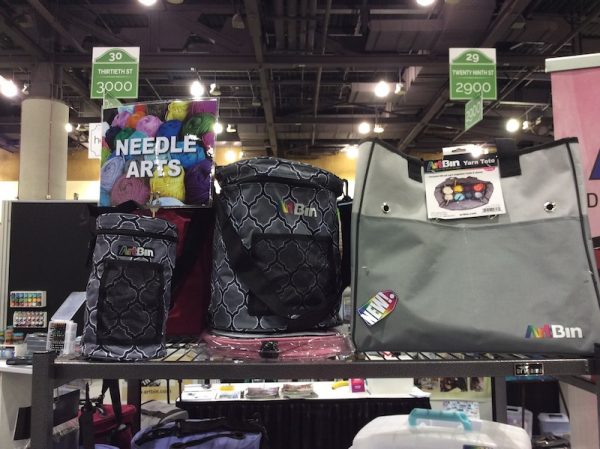 ArtBin’s parent company, Flambeau, reached out to me after the show and then sent me the ArtBin Yarn Tote to review. I liked it right away, but I’ve been fooled by project bags that fall apart with a little use before, so I decide to put it through some serious usage before sharing my review with you. After using it regularly for six months, I can definitely say that it’s as solid as it appeared when I first received it!

Let me tell about the what I like about the bag. There’s a removable yarn sleeve that you can fit 8 large skeins of yarn into with each skein in it’s own pocket. This sleeve has bag handles, so if you have a smaller project, you can take out the sleeve and carry it around by itself. Since I only have 4 skeins in the sleeve in this picture, the other pockets collapse into the side so they don’t take up extra space in the tote. 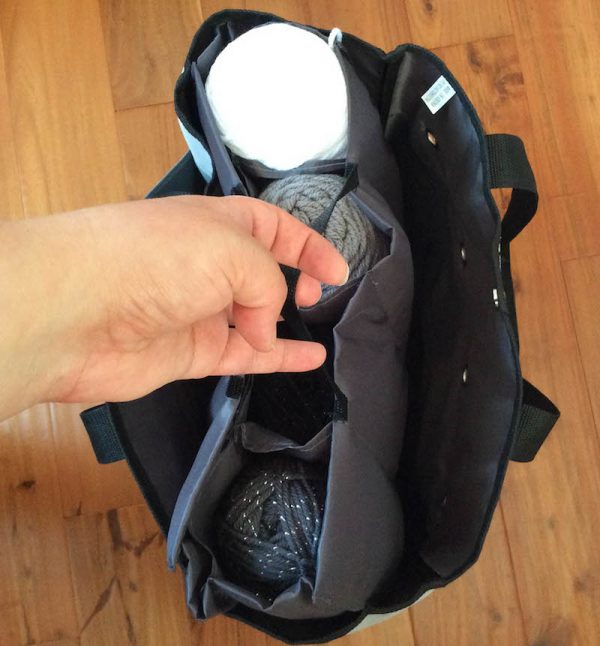 The base of the tote is flat, so it doesn’t sag and cause the yarn to roll around. Instead, it provides support for your yarn and project. There are grommets for each skein of yarn on the sides of the tote, so you can work on a large, multicolor project, like an afghan or blanket, tangle free. 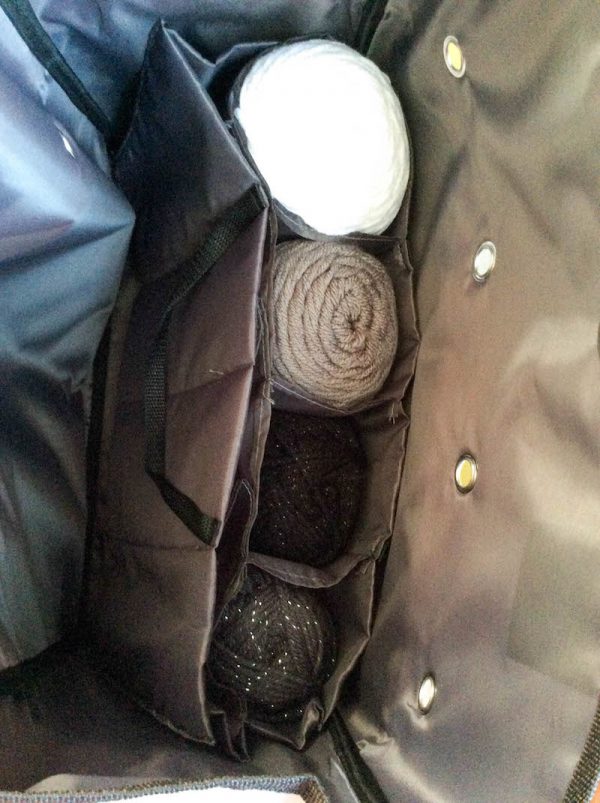 The front pockets are really deep, which is helpful for packing sharp scissors, your wallet or even the semi-enormous smartphones of today for easy access when you’re traveling with your tote. 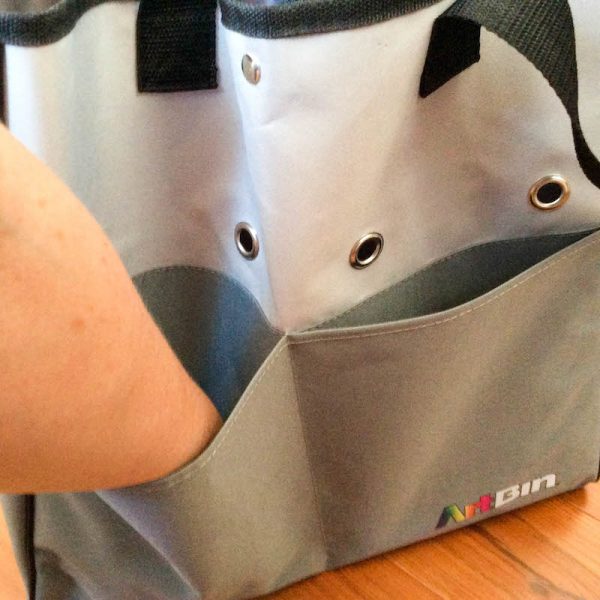 There’s a magnetic closure on the top, so your yarn doesn’t get snagged on the fastener. 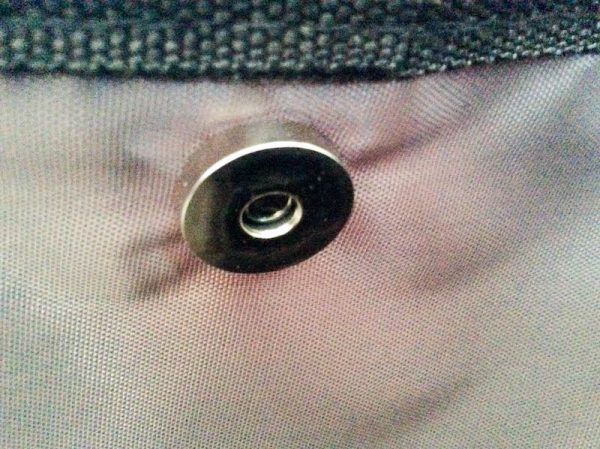 The tote is made from a lightweight canvas, so even though it’s super roomy, it isn’t heavy. In this picture it’s holding 4 skeins of yarn, another small project with yarn in the small bag, a crochet pattern book, and my folder and it still has plenty of room. 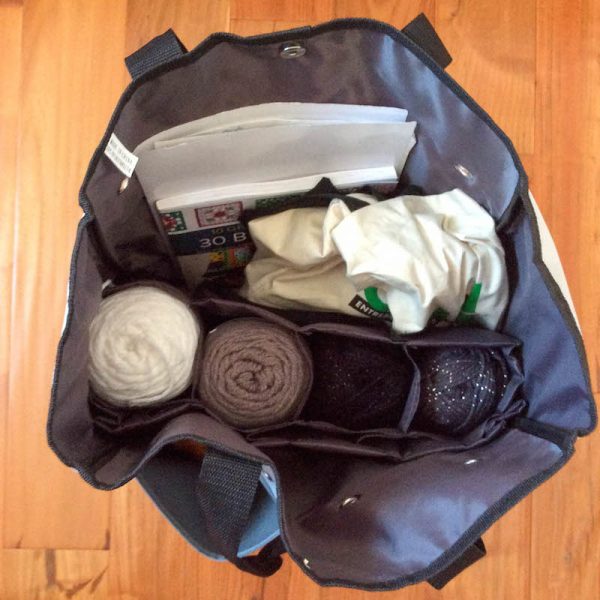 Ok, so how did I put this to the test? All the features I’ve described are great and they have lasted. I’ve worked on several multi-color projects with no yarn snags and few tangles. But the real test was when I used this bag because of its larger size and flat bottom to help me carry stuff around New York City that is much heavier than yarn. I’ve used it to carry my Cricut Cuttlebug and EasyPress 2 (at separate times) while still in their boxes to another location to film an “unboxing.” I’ve used it to carry yarn, paint, tripods, camera equipment, my laptop, quilting mats and rulers, and more to do photo shoots. I’ve used it to carry nearly completed blankets on the subway so I could finish crocheting projects during my commute. Through it all, the bag has held up and the straps have stayed strong.

If I had a magic wand (because I’m me), the ArtBin Yarn Tote would be available in a few more Caribbean-themed colors. The grays are a bit drab and just call out for customization. On the other hand, if there’s only going to be one color, it’s better that it’s neutral! I’ve gone back and forth in my mind about padding for the straps. When I’m carrying yarn projects, it isn’t needed at all. But when I’ve carried big boxes in here (because they fit), padding would have been nice. However, it would just add to the weight of the bag, so in the end, I feel like the folks at ArtBin made the right choice by keeping the bag as lightweight as possible. If you have 8 skeins in there and half a blanket, you don’t really want any extra weight. 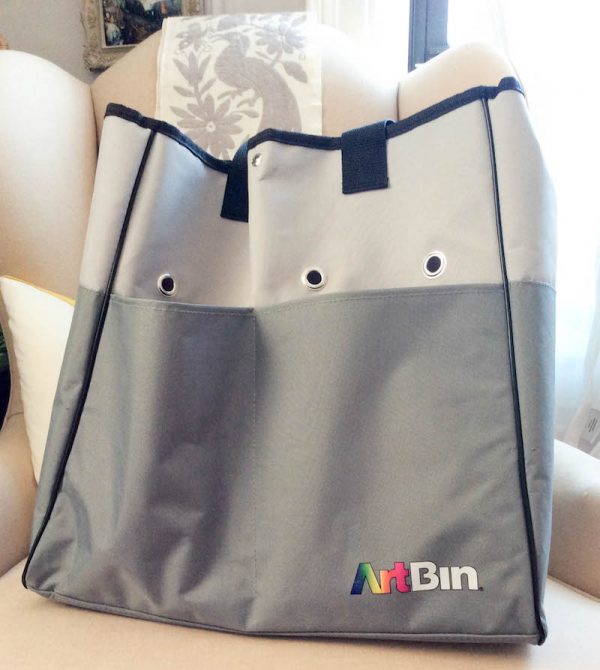 If you like to crochet or knit large projects, or if you do a lot of crafting on the go, I think you’ll love the ArtBin Yarn Tote!