I’m so excited to announce the second annual #LatinxMakerMonth Instagram celebration of makers during Hispanic Heritage Month! I hope you will join me over the next 30 days as I share the work of a talented group of Latinx and Hispanic makers including crochet and knitting designers, indie yarn dyers, cosplay sewists, and more!

This post contains affiliate links. I may receive compensation (at no added cost to you) if you make a purchase using these links.

This is my second year hosting #LatinxMakerMonth on Instagram. My long-time readers know I’m proud of the ways in which my cultural background has influenced my creativity. If you’re new to Underground Crafter, you can get to know me in this Instagram post!

Have we met?⁠ ⁠ Tomorrow, I’m kicking off the second annual #LatinxMakerMonth on Instagram and I realized that last year I was so busy sharing other makers that I forgot to introduce myself. Since it looks like we will have a busy schedule this year, I thought I’d pop in beforehand and say hello to anyone new here.⁠ I’ll be sharing “about me” posts throughout the day.⁠ ⁠ I’m Marie. I’m a native New Yorker born in Brooklyn. I’ve lived in Brooklyn or Manhattan for about 93% of my life, so I thought this picture of me at the Brooklyn Promenade overlooking the Manhattan skyline was appropriate. Of course, since March I haven’t stepped foot in Brooklyn but that’s a story for another day.⁠ ⁠ I’m Cuban and Italian-American. My sister is Mexican-American and I’ve lived in Puerto Rican, Dominican, and Salvadorean communities, so I’ve had the opportunity to experience diversity within Latin American culture. In addition to being a #crochet and #knitting pattern designer, #sewing and #crafts blogger, and all around lover of the #handmade lifestyle, I’m also a #scifi nerd and a cat person. (Other people’s dogs that I don’t have to walk are also fun.)⁠ ⁠ By the way, I’m wearing my Crunch Stitch Infinity Scarf, a #freecrochetpattern in @lionbrandyarn Wool-Ease Thick and Quick #yarn in this pattern. Head over to my blog to get started on your version. And, don’t forget to introduce yourself in the comments!⁠ ⁠ #undergroundcrafter #lionbrand #haken #ganchillo #crochetersoftheworld #crochetersgonnacrochet #crochetersofig #crochetersofinstagram #instacrochet #makersgonnamake #makerstrong #crochetgirlgang #nevernotcrocheting #crochetblogger #crocheteveryday #makersofcolorcollective #latinxcrocheters #latinablogger #bipocinfiber #bipocmakers⁠ #crochetlife⁠

If you missed out on my Hispanic Heritage Month posts from years gone by, you can check them out by clicking on the links below.

I originally started with an interview series back in 2012, but it got too challenging for me to coordinate so last year I switched to an Instagram celebration. I’m so excited to say that 28 Latinx makers are joining in the fun this year.

I’ve invited fellow Latinx and Hispanic makers — mostly (but not exclusively) crochet and knitting designers and indie yarn dyers — to takeover my Instagram account during Hispanic Heritage Month. Each maker will introduce themselves and share pictures so you’ll get to meet some new-to-you accounts to follow for crafty inspiration! If you’d like to spread the word, feel free to share the button below on social media. Right click (on desktop) or tap and hold (on mobile) to save.

I hope you’ll join us for this celebration! We look forward to sharing crochet, knitting, yarn, and sewing inspiration and getting to know each other better! 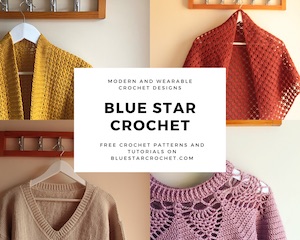